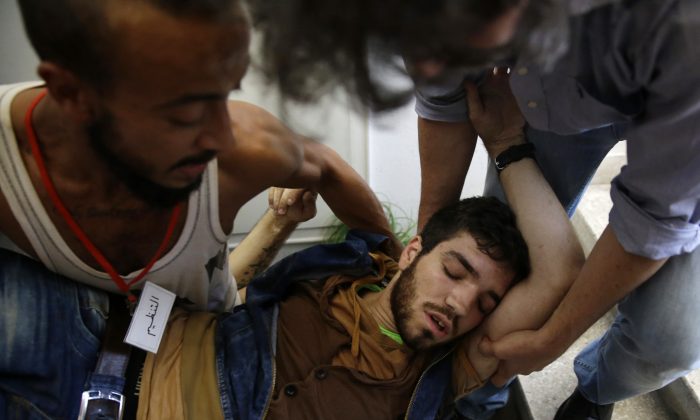 BEIRUT—Lebanese security forces and protesters engaged in a drawn-out standoff outside a ministry that was briefly taken over by activists Tuesday, reflecting both reluctance by authorities to decisively crack down and a lack of focus by protesters — who are determined but lacking a clear path to success.

The unexpected takeover of the ministry by a number of activists demanding the resignation of the environment minister over the country’s trash crisis left some Lebanese bewildered, wondering whether it was the right path to take. It opened the possibility of protracted instability in a fragile country already facing multiple crises.

Angry protests that suddenly erupted last month over the government’s failure to deal with the garbage crisis have evolved into the most serious anti-government demonstrations in Lebanon in years. The protesters seek to challenge a political class that has dominated Lebanon and undermined its growth since its civil war ended in 1990.

Their goal is shared by most Lebanese. But differences over the tactics used are already emerging.

“There is no coherent message coming out from the protesters,” said Salwan Issa, a 39-year-old sales manager who stayed away from Tuesday’s protest. “We all want the same things but nobody wants chaos,” he said.

Others also questioned the ability of the protesters to channel their grievances into a fruitful process.

“I understand the urge to do something different and to convey the message that people are fed up, but they (protesters) are basically ramming themselves and the government, I think, into a corner,” said Maha Yahya, a senior associate at the Carnegie Middle East Center.

Following three huge protests over the past two weeks, the main group behind the protests known as “You Stink” gave the government a Tuesday deadline to begin responding to its demands, starting with the resignation of the environment minister. He refused, resigning instead from a government committee assigned to resolve the trash crisis.

On Tuesday, a group of about 30 protesters from the movement known as “You Stink” marched into the ministry, pushing through security guards at the entrance of the building.

They sat cross-legged on the floor, clapping and shouting slogans against the minister, Mohammed Machnouk, who was holed up in a nearby office on the same floor.

“Out, out, out!” they shouted. Following an hours-long standoff during which police cut off electricity, air conditioning, and closed the bathrooms on the 8th floor, riot police dragged most activists out of the building, beating some of them with batons. At least two activists, Nemat Badreddine and director Lucien Bourjeily were injured and taken to the hospital. Bourjeily suffered a broken shoulder.

Skirmishes erupted outside as dozens of protesters outside pelted security forces with bottles and stones. As night fell in Beirut, about a thousand protesters remained gathered downtown.

The protests have attracted supporters from across Lebanon’s political and religious divides, reflecting the growing frustration with an aging and corrupt political class that has failed to provide basic services, but for which there appears to be no clear alternative.

In addition to the “You Stink” movement, the protests are being led by some half a dozen civil society groups with names like “Leave us alone” and “We Want Accountability” and “We’re Disgusted.”

While some have insisted on the resignation of the environment minister or the entire government, others say the main demand should be parliamentary elections. The country has been without a functioning parliament — the last elections were held in 2009 — and no president for the past 15 months.

Unlike Arab Spring protests in Egypt, Tunisia, Libya or Syria, Lebanon is not a dictatorship and the anger is not directed against one person. It is, rather, a revolt against a sectarian system and an entrenched political elite seen as greedy and dysfunctional.

“I don’t think the current state of protests will lead to anything,” said Hilal Khashan, professor of political science at the American University of Beirut. “There is no functioning government to address the issues.”

The standoff outside the ministry — transmitted live by local TV channels — reflected the government’s reluctance to potentially fuel the protests by resorting to violence.

After hours of failed negotiations, police entered the building and dragged out most of the activists one by one.

“They cut off the electricity, they closed all the bathrooms. There were no windows, we had no ventilation,” said Mohammed Mugharbel, 21, a graphic design student who said he joined the sit-in to deliver a message peacefully.

“We were holding our hands. They stepped over our hands like cockroaches,” he said.

Bourjeily earlier told The Associated Press from inside the building that the activists would not leave until the minister resigned. He said the group had decided to stage the sit-in “because someone should be held accountable.”

“Instead of resigning from the ministry he resigned from his responsibility to deal with the garbage issue,” said Bourjeily. “We are left with no choice — we want to make ourselves heard.”

Garbage has been piling up for weeks since the government closed the city’s main landfill without finding a replacement.

So far the only response to the growing protest movement has been a promise by the parliament speaker for high-level talks between Lebanon’s politicians in the coming days.

Speaker Nabih Berri announced Tuesday that the first dialogue session will be held Sept. 9. His call for dialogue has been backed by the country’s main political leaders, but it was unclear how such talks between the same group of veteran politicians being vilified by the protesters would help break the deadlock. Protesters called it a farce.

Yahya, the Carnegie analyst, predicted a long stalemate. “What did they (protesters) take into account when they took this step? Have they been discussing it with anyone? Is there a plan B,” she asked.

Reflecting concerns about a protracted crisis, authorities on Tuesday erected a tall metal fence around the prime minister’s office and government headquarters in anticipation of more protests. Anti-government protests turned violent last week after a few of the protesters repeatedly tried to remove the barbed wire protecting the building.

The government put up a concrete barrier following those protests, which protesters were quick to brand a “wall of shame.” That wall was removed less than 24 hours later upon orders from the prime minister.