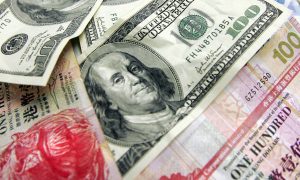 In the first half of this year, Hong Kong’s initial public offerings (IPO) have reached the highest number in the past ten years and the highest amount raised since 2011. However, the quality of the newly listed enterprises is uneven, and many new IPOs are in danger or have already been abandoned.

For example, the Chinese retail company Fujian Nuoqi Co., Ltd (1353) was listed in Hong Kong in January. Its stock exchange was recently suspended after a rumor spread about the company’s boss.

The rumor was posted by the general manager of Quanzhou Dingxing Footwear Co., Ltd. on China’s Twitter-like Sina Weibo, according to Sina reports. The post stated that Fujian Nuoqi’s chairman Ding Hui and his wife Chen Ruiying are suspected of fraud and owe large amounts of money, and the pair has absconded.

On July 23, Fujian Nuoqi had a sudden decrease of 26 percent and then decided to suspend the stock exchange. They last traded at $1 before the suspension. Fujian Nuoqi had already been dropping for five consecutive days for a total drop of 54 percent.

The next morning, Fujian Nuoqi stated on their website that the rumors are unfavorable to the company and have not been confirmed. They stated that the rumors have affected the daily operation of the company, indirectly affecting the stock’s performance and causing them to suspend it.

Fujian Nuoqi added that everything is currently operating normally, and the company has already held a meeting about the unfavorable rumors, ensuring the company’s smooth operation.

However, with so many new IPOs joining the market this year, nine IPOs have already been issued with a profit warning.

Among them was Dynagreen Environmental Protection Group Co., Ltd. (1330), which was listed on June 19 and issued a profit warning on July 9. This set the record for the fastest profit warning ever issued.

A new IPO, Forgame Holdings Ltd. (484), has been listed for 9 months and has also recently issued a profit warning.

Forgame’s sponsor, Morgan Stanley, expected a 36 percent increase in its earnings over the next three years, but its performance did not meet expectations. Credit Suisse Group reduced Forgame’s target price to HK$26 (US$3.35).

Hydoo International Holding Ltd. (1396) recently announced that they have lost contact with their chairman, Wang Zai Xing, for over two weeks. On June 23 they announced that they were “cooperating with relevant departments to understand the situation” but gave no further explanation.

The company became suspended once again on June 23, with the company pending a relevant announcement. Morgan Stanley had already issued a report stating that Hydoo’s chairman’s disappearance may influence future growth of assets and earnings.

However, as the incident has not been confirmed, Hydoo’s rating has been dropped from “in-line” to “reduce.”

When asked why so many new IPOs have profit warnings, David Chin Hung-I, managing director and head of investment banking for UBS Asia, replied that after a company has become listed, it is hard to guarantee that the profitability will continue to increase.

Chin emphasized the importance of the role of sponsors, including completing thorough investigations and disclosing as much as possible in the prospectus. He said that when UBS sponsors IPOs, it judges them very cautiously and uses a lot of human and material resources.

However, he said that even with sufficient investigation, it is hard to prevent unexpected incidents.

“As mainland China is a rapidly emerging market, there are still a lot of risks, and we cannot exclude individual cases of fraud,” Chin said.

Chin said that the bank strictly assesses each individual case to guarantee the quality of listed IPOs, and they do not accept just anything. He said that Hong Kong’s regulatory bodies, including the Securities and Futures Commission and the new sponsor ordinance of Hong Kong Exchanges and Clearing Limited, will also take appropriate action against those not reaching the standard.