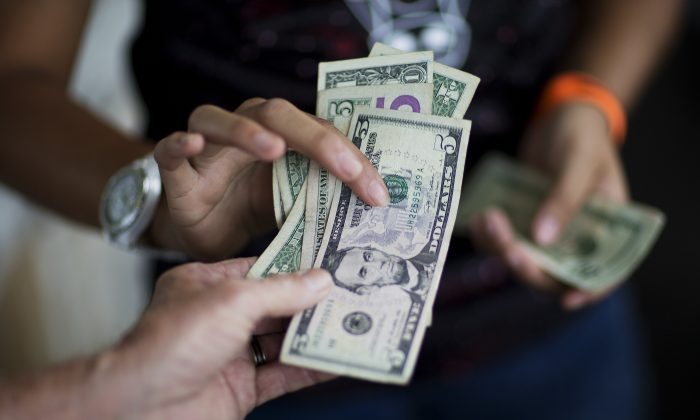 In this June 6, 2015, file photo, a customer, bottom, pays for goods while shopping at the Atlanta Farmers Market in Atlanta. (AP Photo/David Goldman)
Business & Economy

Some tantalizing signs have suggested that wages are beginning to pick up after barely moving in the 6½ years since the Great Recession officially ended. On Friday, the latest jobs data should offer some clues about whether the modest pay gains will continue.

By many measures, the job market is nearly back to normal. The unemployment rate is 5 percent, down from its 10 percent peak in 2009. Employers have added a robust average of 206,000 jobs a month this year, more than enough to keep lowering the jobless rate over time.

Economists have forecast that Friday’s report will show that 200,000 more jobs were added in November and that the unemployment rate remained at 5 percent, according to data firm FactSet.

Even if hiring falls far short of those numbers, the Federal Reserve is widely expected to raise the short-term interest rate it controls for the first time in nine years after its next policy meeting Dec. 15-16. Friday’s jobs report will be the last one the Fed will see before that meeting.

Fed Chair Janet Yellen said in a speech Wednesday that the job market should soon reach full health as long as the economy keeps growing at its current pace. More hiring and better pay should also lift inflation back up to the Fed’s 2 percent target over time, Yellen added.

But given the significant gains the job market has made in recent years, the Fed won’t likely be dissuaded from a rate hike later this month no matter what Friday’s report says.

“It is hard to imagine how weak (the report) would have to be for the Fed to reverse course,” said Drew Matus, an economist at UBS.

Even so, wage growth has remained perhaps the job market’s biggest weakness since the recession ended. Average hourly pay has grown at only about two-thirds of the pace typical of a healthy economy. Some economists point to the lagging pay as evidence that the job market isn’t as healthy as the low unemployment rate would suggest.

There have been signs in recent weeks that the improving job market is finally raising pay. In October, average hourly earnings rose 2.5 percent from 12 months earlier — the fastest annual increase since the recession ended. It’s still below the roughly 3.5 percent annual gain consistent of a strong economy.

And last week, the government said total wages and salaries rose at a much faster pace in the spring and summer than it had previously estimated.

“Rising wages are proof positive that we are at full employment,” said Mark Zandi, chief economist at Moody’s Analytics. Full employment, as defined by most economists, is the lowest the unemployment rate can go without sparking inflation.

Yellen highlighted the potential turnaround in her speech Wednesday.

“We have seen a welcome pickup in the growth rate of average hourly earnings … and of compensation per hour,” she said.

Most economists expect pay increases to continue, though the data tends to be volatile and there may not be solid gains in each month’s jobs report.

Jim O’Sullivan, chief U.S. economist at High Frequency Economics, says some of the income gains over the spring and summer likely reflected bonuses and other one-time payments. Those increases typically aren’t captured in the average hourly pay data in the jobs report. They show up months later in tax data.

Some economists argue that the recent wage increases haven’t been large or consistent enough to justify a Fed rate hike.

“If lots of firms were expecting to do lots of hiring soon, they would have to push up their wages to attract those new workers, and we would start seeing stronger upward pressure on both wages and prices,” said Andrew Levin, an economist at Dartmouth and former Yellen adviser.

There are other signs that the job market still isn’t fully healed. The number of part-time workers who would prefer full-time jobs remains above its pre-recession level. And millions of Americans have stopped looking for work since the recession ended, in part because they were discouraged by a lack of opportunities.

Still, the Fed’s ability to reverse those trends is limited. Some Americans who haven’t worked or looked for work for an extended period may need intensive job training, for example.