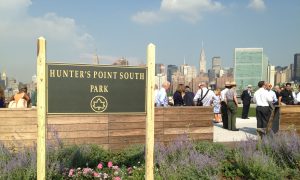 NEW YORK—Plans are underway for a ‘High Line’ in Queens, to transform 3.5 miles of abandoned railway tracks into a park, and the public is invited to give their input. Organizers of the QueensWay will use social media during the project’s feasibility study to determine the design and cost of the project.

The managing principal of one of the two firms leading the project, WXY Architecture + Urban Design, Adam Lubinsky said, “We know that lots of people will be interested in having a dialogue about the future of the QueensWay, and we will have a number of forums to get people involved.”

Jack Friedman, Queens Chamber of Commerce executive director called the project an important milestone, according the Friends of the QueensWay site.

“We are proud supporters of this effort and believe, when completed, the QueensWay will provide a much-needed boost to the Queens economy and its diverse local businesses,” Friedman said.

Friends of the QueensWay are group of local individuals and organizations who have been advocating for the project since late 2011. They announced on Wednesday the full team of specialists selected to work on the project, including Susannah Drake, the principal of dlandstudio, the second urban design firm leading the project.