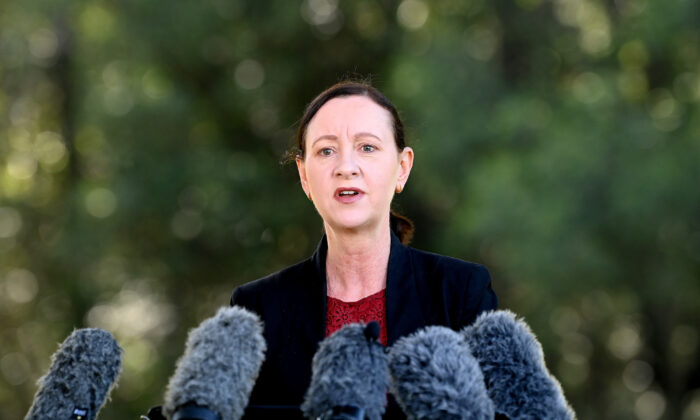 Health Minister Yvette D'Ath speaks after the announcement of a three-day lockdown for the Greater Brisbane area in Brisbane, Australia on Mar. 29, 2021. (Photo by Bradley Kanaris/Getty Images)
Australia

The Queensland government has done away with the requirement for travellers entering the state to receive a PCR test on the fifth day of their visit.

In a press conference on Tuesday, the state’s Health Minister Yvette D’Ath said that based on data received in the past 24 hours the chief health officer has advised that the tests were no longer required.

“Anyone who is waiting in lines for their day five tests can leave,” she said.

The decision came after the recent data showed that only 0.6 percent of positive cases were being picked up by the test.

Previously, travellers entering Queensland from a COVID-19 hotspot (which includes the entire states of New South Wales and Victoria) were required to be fully vaccinated, apply for and receive a border pass, return a negative PCR test within 72 hours prior to arriving in Queensland, and take another PCR test on day five of their trip.

D’Ath said that although the day five test has been scrapped, travellers filling in their border pass would still need to agree to take a test because the system had not been updated yet.

She said the government could have held off on announcing the change until the system was cchanged but said people should be getting on with their holidays. The move could take some pressure off health system resources.

The Queensland government is also considering going further by replacing PCR testing with rapid antigen testing (RAT), a move that should reduce pressure on facilities.

State Premier Annastacia Palaszczuk said that in a meeting on Dec.22, the Cabinet had discussed the potential use of RAT.

“We need to see how they would be administered,” she said. “We’re looking at bringing those in on the first of January.”

An announcement is expected in the next few days, and comes as tens of thousands of prospective Christmas travellers were caught up in long queues and longer-than-usual wait times for PCR test results—impacting travel plans.

Federal Treasurer Josh Frydenberg has also indicated his preference for RAT to take over from PCR testing for travellers, saying they were less expensive and faster.

“I think that’s a sensible balance recognising that people want some level of surety about their health status before they travel, ” he told the ABC on Tuesday.

“But at the same time they want to avoid the long queues and long waiting times coming with the PCR tests.”

Queensland Chief Health Officer Dr. John Gerrard said in a press conference on Monday that RAT was suitable for screening but was not as sensitive as PCR.

“But if we’re using it for this specific purpose, as a screen from a high incidence state, then it’s appropriate,” he said.

“It’s still being reviewed by the Australian Health Protection Principal Committee, but I support it and it will be an appropriate test.”