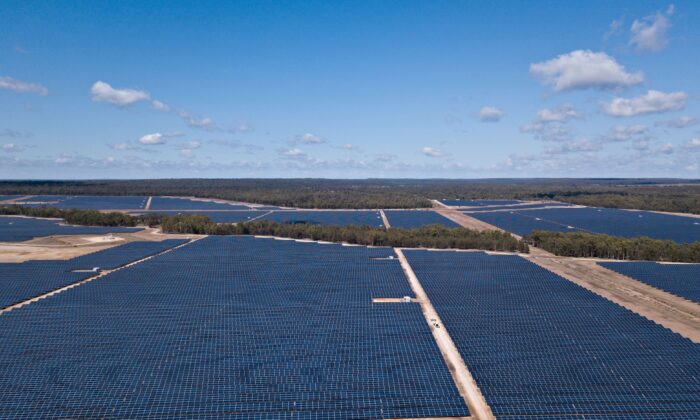 An aerial view of the Darling Downs solar farm near Dalby, Queensland, Australia in this undated photo, on Feb. 11, 2020. (AAP Image/APA)
Australia

The Queensland Audit Office (QAO) has recommended the state government improve transparency and accuracy in public reporting on its transition to renewable energy sources after finding that some calculations of its progress were inaccurate and its renewables target was not clearly defined.

Renewable energy currently makes up about 18 percent of Queensland energy generated but the Palaszczuk government in 2017 set a target to achieve an energy consumption of 50 percent by 2030.

The QAO found that the Department of Energy and Public Works, which is responsible for the management of the transition, reported an “estimated actual” of 20 percent as the percentage of renewable energy in Queensland.

“We re-calculated performance against the target and found Queensland’s progress was around 19 percent,” the report stated.

The report explained that the omission of one percentage point—19 percent actual versus 20 percent reported—in the level of renewable energy translated into a sizeable change in Queensland’s energy system.

Auditor-General Brendan Worrall couldn’t say whether the state government was on track to meet its targets after 2030, Courier Mail reported.

“It has not set out its desired combination of generation from wind, solar or hydroelectricity sources, nor has it set out in detail its preferred locations for renewable development,” he said.

“As a result, it is difficult to know whether the transition to renewables is on track or whether the department should adjust its objectives or processes.”

The QAO recommended the government publish more information on the actual renewable generation in Queensland, including, for example, the amount of energy generated from wind, solar, and other sources.

Of the state’s (18) percentage of renewable energy generation sources, rooftop solar is the largest, at 40 percent; followed by large-scale solar, at 27 percent; then wind, at 14 percent; bioenergy, at 12; and hydroelectricity at 7 percent.

Meanwhile, most of Queensland’s energy is generated from thermal sources like coal, at 68 percent, and gas, at 13 percent.

A number of new projects are reported to see Queensland achieve its renewables ambitions, with billions of dollars in projects in their early stages of planning.

“There are now 48 large-scale renewable energy projects in operation or in various stages of delivery, and when complete in approximately 2025 will push Queensland’s renewable energy capacity to over 10,000 megawatts or almost 45 percent of all generation capacity,” said Renewables Minister Mick de Brenni, Brisbane Times reported.

The government’s direct role in transitioning to renewables is via its Renewable Energy and Hydrogen Jobs Fund that will see existing energy producers taking a greater role in green energy production.

“Under this fund, government owned energy corporations may significantly increase their development and ownership of renewable energy generation. They may also access the fund to support the development of private sector renewable energy projects,” the QAO report stated.