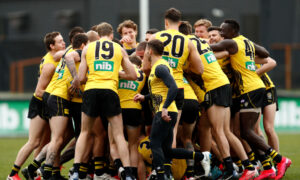 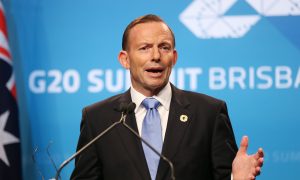 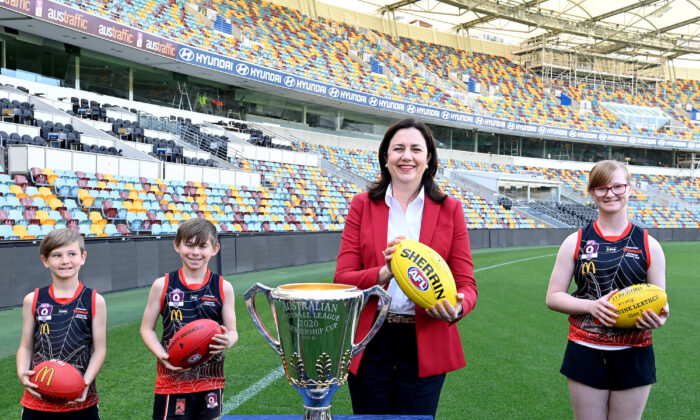 Queensland Premier Annastacia Palaszczuk poses for a photo after a press conference announcing that the 2020 AFL Grand Final will be played at the Gabba in Brisbane, Australia on Sept. 2, 2020. (Bradley Kanaris/Getty Images)
Australia

The premier shrugged off the questions about the potential for community transmission—which is the primary reason the state’s border remains closed.

When asked by reporters in Cairns on Sept. 2 about reopening the Queensland border, the premier said: “There will be no changes for the month of September.”

The premier clarified for reporters that the chief health officer had provided no advice to reopen the border as yet. This decision will be reviewed again at the end of the month.

Brisbane’s Gabba stadium will host the Grand Final on Oct. 24, one week before the state election on Oct. 31.

BREAKING: It’s official – Queensland will host the @AFL Grand Final at the @GabbaBrisbane on October 24.

It’s the first time in 123 years the Grand Final has been held outside Victoria – and we’re ready!#AFL pic.twitter.com/DJYYMPqmt1

More than 30,000 fans will be allowed into the stadium under COVID-Safe plans. It’s the first time a Grand Final will be held outside Victoria in 123 years.

The AFL Grand Final has never been held anywhere but Melbourne.

I want to thank the @AFL, and especially the game’s fans in Victoria, for trusting Queensland with their most important event.

We’re ready and determined to give everyone a Grand Final you’ll never forget.#AFL pic.twitter.com/BYyx0jD0eH

The premier told reporters in Cairns on Sept. 2: “We know that it is just this once and it is to look after the AFL whilst Victoria is going through a very difficult time.”

“I want to thank the AFL, and especially the game’s fans in Victoria, for trusting Queensland with their most important event,” the premier said in a media release on Sept. 2.

“This will be a once-in-a-lifetime opportunity, so we are determined to give everyone a Grand Final they’ll never forget.”

Tourism Minister Kate Jones said the AFL Grand Final would be a welcome boost to the state.

“Very few industries have been as hard hit by COVID-19 as our tourism and events businesses, so to be able to host the AFL Grand Final in Queensland for the first time ever is a huge confidence boost,” she said.