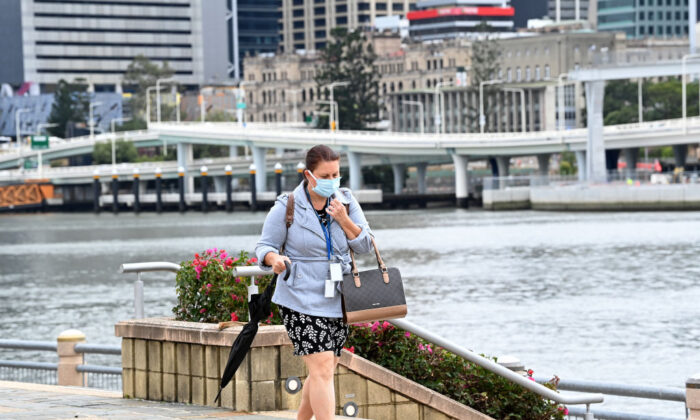 A lady is seen going for her morning walk wearing her mask at Southbank, Brisbane in Australia on Sept. 29, 2021. (Bradley Kanaris/Getty Images)
Australia

The Queensland state government will shutter a $223 million (US$154.6 million) COVID-19 quarantine facility in Wellcamp, west of Toowoomba, just six months after it was opened.

In the same announcement, Deputy Premier Steven Miles said another multi-million dollar, federal government-funded quarantine facility in Pinkenba, Brisbane—due to be finalised in a few weeks—would not be opened.

On July 27, Miles announced that the state would not continue leasing the Wellcamp-based Queensland Regional Accommodation Centre until Aug. 1.

Wellcamp is about 144 kilometres west of Brisbane, the state capital, while the federally funded $350 million, 800-bed Pinkenba facility is adjacent to the Brisbane Airport and cruise ship terminal.

Building of the Wellcamp facility has been contentious with the state government keeping a lid on the costs of the project amid concerns the facility would have little use—incidentally, just weeks after its opening in February several state-wide vaccine mandates were lifted and as of July 27, just over 700 individuals have stayed in Wellcamp.

“Having a dedicated quarantine facility provided the confidence we needed to open state and international borders, and it provided an insurance mechanism against an unknown future,” according to a statement from Miles.

“The expert advice was that we needed it so Queensland could cope with future unknowns and provide the certainty we needed to open up the state.”

During Budget Estimates hearings in Queensland, Miles was forced to reveal that the government had spent $198.5 million on capital and leasing costs for the Wellcamp facility—in partnership with the Wagner Group.

The state government says it is now looking to repurpose the facility.

The Labor government’s decision to give the project the greenlight came during an ongoing disagreement with the then-federal Liberal-National Coalition government over providing quarantine facilities for COVID-19 infected travellers.

“[Former Prime Minister] Scott Morrison failed to act and we now have a dedicated Quarantine facility for whatever may happen in the future,” according to Premier Annastacia Palaszczuk.

State opposition leader David Crisafulli said the cost of Wellcamp equated to around A$325,000 per guest.

“The state government could’ve bought a one-bedroom unit for each guest,” he said in comments obtained by AAP.

“This was a trigger-happy decision to try and wedge the former federal government, and this waste could’ve funded nearly 2,500 nurses in the middle of a health crisis.”