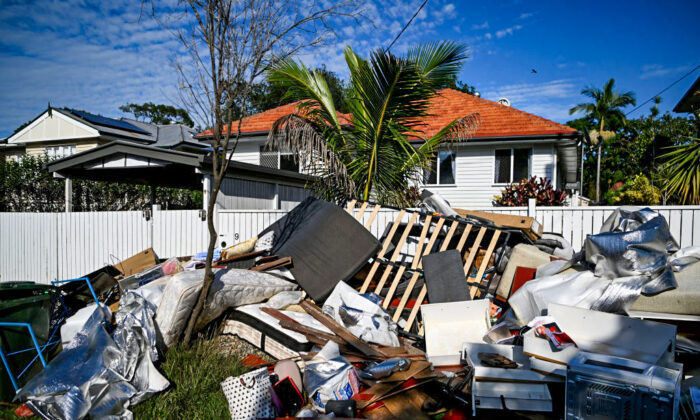 Flood-damaged items and debris are left outside a house in Brisbane, Australia, on March 6, 2022. (Dan Peled/Getty Images)
Australia

The Australian state of Queensland has put forward a new support package to financially enable the state government to buy back homes of up to 500 flood victims.

Queensland Deputy Premier Steven Miles said on March 19 that the state had asked the federal government to jointly fund a $771 million (US$572 million) support package under national disaster recovery arrangements.

With the new package, Queensland’s flood-hit residents will have the option to retrofit, raise or sell back their homes.

“This is the biggest potential buyback…fund we’ve ever had available to us. We anticipate that will allow us to buy back 500 properties if people want to,” Miles told reporters.

However, the Queensland government will have to work out the guidelines to specify how the options will be assigned to affected residents.

The deputy premier said that, according to previous experience, people preferred to remain in their homes and remodel the properties to make them more resistant to floods.

In addition, the proposed package will allow the state to raise structural assistance grants for residents from under $15,000 to $50,000 and provide another $30 million in clean-up support to local governments.

“Sadly, the floods have damaged almost 7,000 homes. This support package of $741 million will deliver a range of household resilience measures for Queensland homes directly impacted by floods in the 2021-22 season,” Miles said.

Meanwhile, Queensland Premier Annastacia Palaszczuk has asked Prime Minister Scott Morrison in a written communication to agree to the proposal, in which the state and the federal government will split the funding package 50:50.

“We certainly hope that that agreement will come quickly so that we can provide details out to residents,” Miles said.

Nevertheless, he said that the Queensland government would need to reassess its options if the federal government did not consent to co-finance the support package.

“I can’t imagine the prime minister would want to say to flood victims that they have to move back into a home that will flood again,” he said.

At the same time, Queensland is urging the Australian government to provide flood victims in the state with the same hardship assistance payments offered to affected residents in New South Wales.

The National Recovery and Resilience Agency, a federal government body responsible for helping Australians affected by natural disasters, did not immediately respond to a request for comments from The Epoch Times.