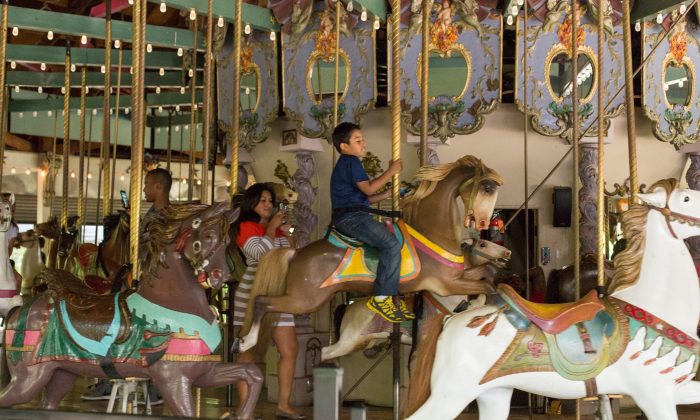 A boy rides the Forest Park Carousel June 30, 2014. The landmarked carousel was carved in 1903 by the Daniel Muller, who is recognized as one of the greatest designers of carousels. It is one of two that still remain across the country. (Laura Cooksey/Epoch Times)
New York

Queens: The Borough of Hidden Gems

Historic buildings, an abundance of wild nature places, and our resident tour guide who reveals it all.
By Catherine Yang

NEW YORK—Despite having the best transit network in the country, New Yorkers can be incredibly provincial. Many never venture outside of their neighborhoods or boroughs, and many never need to.

Up until a few years ago, travel journalist and fourth generation New Yorker Adrienne Jo Onofri felt the same way, spending her career writing about cities around the world but seeing little of her own backyard. But since then she’s walked the entirety of both Brooklyn and Queens.

Popular and increasingly expensive neighborhoods like Long Island City and Astoria are still out of roaming range for many city natives, and even those who live a subway stop away may not realize Queens’s little known gems.

“Some of the [neighborhoods] aren’t even on a map, they’re so small they’re literally like four streets by two streets,” Onofri said. Southeast of the John F. Kennedy International airport are some of these little known neighborhoods, like Warnerville and Meadowmere, neighborhoods where streets are one block long and always lead to the water, “so a lot of the homeowners have boats,” Onofri said. “They’re almost like rickety little fishing villages.”

A few years ago, Onofri wrote “Walking Brooklyn,” a tour book with 30 neighborhood walks, and in the past year she has been finishing a book of Queens.

It’s a borough of extravagant old mansions, churches of any and every denomination, nature, and sprawl.

There is a dark brick building across from a Catholic church Onofri passes often in Elmhurst, where the signage is hardly evident and the entrance is around the back through what looks like a private driveway.

One day Onofri stopped and realized it was a Jain temple, a house of worship for a religion she had seen much of on a trip to India. Incidentally, this was also the largest Jain temple in North America. Curious, she decided to walk around the building, and found that anyone was welcome—even to join the worshipers for a meal on the fourth floor, beside the sky garden and bright, ornate temple.

“I don’t know why I thought to do that,” Onofri said. And houses of worship like these are scattered across Queens, the city’s largest borough.

The diversity of Queens is well known, Onofri said, but the sites of American history and its abundance of nature are lesser-known gems she thinks New Yorkers would enjoy. Though Queens has fewer landmarks than Manhattan or Brooklyn (just 20 individual landmarks, and 11 districts), many historic buildings have continued to stand because of the lack of real estate interest.

Onofri has long loved the trails in northern Central Park and Prospect Park, but after discovering the parks, trails, and glacial ponds across Queens, “I’m never going to be impressed by that again,” she said.

On these trails in Queens “you feel like someone just dropped you in the woods somewhere,” she said, but the parks are not remote.

Just yards away from a bus stop on hectic Woodhaven Boulevard is a narrow dirt path leading into Forest Park’s turtle-filled Strack Pond. Trees surround the trails, and go on for 500 more acres.

Making a Case for Queens

Walking tours are a daily event in New York City, and every guide’s style and focus is a little different.

For a period of time, Onofri was covering tour guide operations for travel publications, and she remembered being fascinated with the guides.

She was then surprised to learn how many New York tour guides were actors and artists on their second jobs. Onofri had thought it would be out of her reach.

“I thought it was such an aspirational job,” Onofri, who was trained as a journalist, said.

“My philosophy is to tell the story of a neighborhood; past, present, and probable future,” Onofri said. Onofri had been leading tours for friends and family—until the year she wrote “Walking Brooklyn” and worked toward getting licensed.

In 2007, a California-based publisher interested in doing an urban trekking series published Onofri’s Brooklyn walking tour-guide book. Brooklyn, now a huge international brand, is just as much of a site to see as Manhattan for some visitors.

Onofri, a longtime resident of Queens, now own a home between Elmhurst and Jackson Heights. Before that, she lived in Astoria for 20 years, “right up until it got cool,” she recalled.

She had been an advocate for the up-and-coming neighborhood, but friends, family, and people moving to the city usually ignored her recommendations for anything outside Manhattan and Williamsburg. Now Astoria is filled with restaurants and a vibrant nightlife, and from Onofri’s perspective it is like a spillover from Williamsburg.

To satisfy a growing curiosity, later this year, she will start tours in Queens, mostly for local organizations. According to Onofri, New Yorkers are discovering Queens.

6) Flushing Freedom Mile (includes Quaker meetinghouse, Kingsland, St. George’s, Bowne House, and so on)
Off the No. 7 train’s last stop, a series of signs in Flushing guides people along Freedom Mile

Adrienne Jo Onofri is the author of “Walking Brooklyn and Walking Queens: 30 Tours for Discovering the Diverse Communities, Historic Places, and Natural Treasures of New York City’s Largest Borough,” which will be published by Wilderness Press this fall.