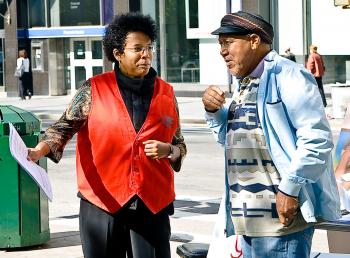 COMMUNITY EFFORT: Pam Lewis (Left) explains the situation of the Redfern Community Center to a passerby. The City is planning on closing the Far Rockaway Community Center, a safe haven for teens in the area. (JOSHUA PHILIPP/THE EPOCH TIMES)
US

NEW YORK—Angered parents and community leaders are holding a 36-hour vigil at City Hall, beginning Sept. 29. The vigil is being held in response to the scheduled closing of the Redfern Community Center on Sept. 30.  The Community Center is one of the only outlets for youth in the troubled Queens community.

In May, 15 year-old Brandon Bethea was shot and killed by a stray bullet from a nearby shooting, while practicing a dance routine with her friends in front of the Redfern Housing Projects in Far Rockaway, Queens. Bethea, who was a dancer with the All Stars Project, a non-profit performing arts organization, was a victim of just one of the 7 shootings that occured at the Redfern Houses that month. Over the last year alone, Far Rockaway has seen a 400% increase in the murder rate.

Following the violence, protests were held, and in response, the Redfern Community Center was re-opened for the summer, after years of having been closed. In the activity-deprived community, kids came to the center in the hundreds, and over the summer, violence virtually stopped.  Now, just a few months later, the Community Center is slated to be shut once again due to a lack of funding amidst the current financial crisis.

At City Hall, Kristen Folda, a manager of the All Stars Project youth programs, explained the situation for kids living in the Redfern Community Projects.

“They are over two hours outside of Manhattan, and really, they have no basic services, no trauma units in the closest hospital, no street lights, no benches, no basketball courts,” said Folda. “The young people out there have absolutely nothing to do.”

“The Redfern Community Projects in Far Rockaway community have been abandoned by the city,” said Folda.

“There are funding cut-backs, and we get that, but this is not one of the things that should be expendable because this is in a community where there is nothing else there.”

Monique Daily handed out materials about the issue at City Hall, Daily expressed her concern, as one of her daughter’s friends was a victim in the May shootings.

“If the community center closes down tomorrow our kids will be lost,” said Daily. “There’s nothing for them to do. They’re either going to be in jail or shot dead. It’s a matter of life and death. We’re just trying to tell the mayor that we need help. We know the city is in a recession now, but what about our youth?”

“Community centers are a place where [kids] can go and hang out, have after school programs, get help with homework . . . stuff where the kids don’t have to be hanging around, hanging out on the streets with the cops harassing them,” said Daily. “If the community center gets closed, what are we supposed to do?”

“We want to support the young people, the parents, and the families, to keep this community center open,” said Lewis. “The mayor should not neglect the poor communities of this city.”