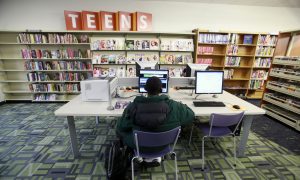 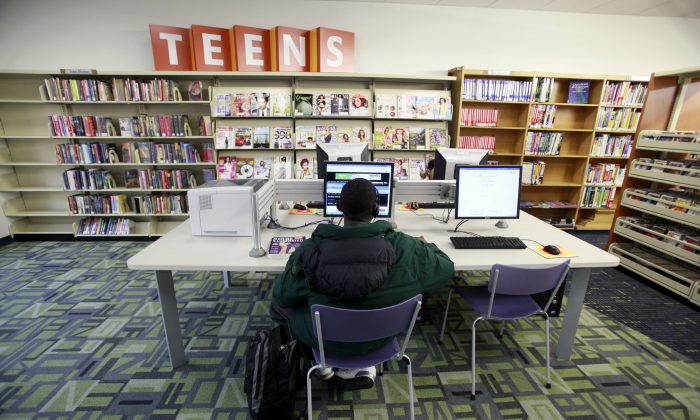 A boy uses a computer in the East Elmhurst public library branch in the Queens borough of New York, on Oct. 19, 2009. (AP Photo/Mary Altaffer)
New York

After months of being suspended and investigated for using library funds for personal use, Queens Public Library President Thomas Galante was fired by the library’s Board of Trustees Wednesday evening.

Based on a report presented to the Board by its lawyer, “a decision was made to terminate immediately Mr. Galante’s employment,” the board said in a statement. “As the Library moves forward, the Board of Trustees will continue working to ensure greater transparency and the proper administration of the Library and its funds in furtherance of its mission. Queens Library will continue to provide outstanding value to the people of Queens.”

Galante, who had served as senior management at the library since 1986, had spent tens of thousands on renovations, meals, and entertainment. The revelation led to the dismissal of several board members who sided with Galante.

The Daily News first reported on Galante’s $390,000 salary early this year, and emphasized the expensive renovations of his office and executive conference rooms all while the library cut 130 jobs. Soon, city comptroller Scott Stringer launched an audit of the city’s public library branches.

Daily News then revealed Galante may have given renovation contracts to an acquaintance from Long Island’s Elmont Union Free School District where Galante had served as a financial consultant and billed $287,000. It prompted the FBI and city Department of Investigation to investigate the library’s contracting policies. The investigations have not yet concluded.

Eight trustees who voted against suspending Galante were soon dismissed, and two more resigned. Six of the fired board trustees sued for compensation and to be reinstated.

The mayor and Queens Borough President Melinda Katz have since appointed four board members.

Galante was suspended in September, on paid administrative leave while investigations and an audit by the city comptroller continued. Vice president Bridget Quinn-Carey has been serving as the interim president after Galante’s paid leave.

The new board voted Wednesday evening to dismiss Galante, but have not yet appointed a new president.

“The Board members, both new and old, who have acted tonight, are to be congratulated on their leadership and for their unwavering dedication to this Library,” said public advocate Letitia James in a statement.