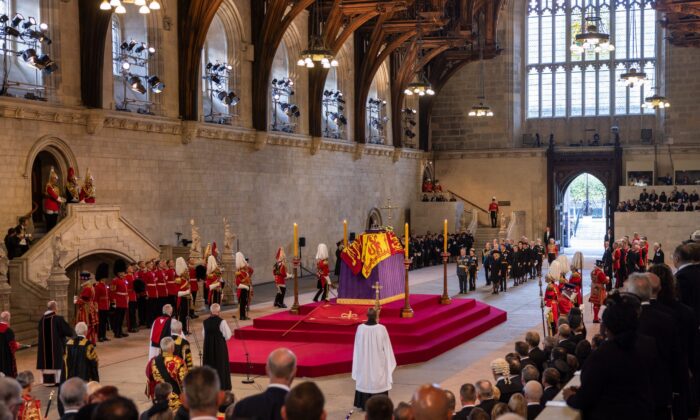 The coffin carrying Queen Elizabeth II is laid to rest for the lying-in-state in Westminster Hall, London, on Sept. 14, 2022. (Dan Kitwood/Getty Images)
UK

The man leading the security operation surrounding the funeral of Queen Elizabeth II on Monday has said it will be the “largest single policing event” the Metropolitan Police has ever conducted.

Deputy Assistant Commissioner Stuart Cundy told a press briefing on Friday that 2,000 police officers from outside London would be in the capital to support the Met and he said: “It will be the largest single policing event the Met has ever conducted. Larger than the 2012 Olympics and the Platinum Jubilee weekend.”

Dozens of world leaders, including U.S. President Joe Biden and France’s President Emmanuel Macron, will be joining Britain’s new Prime Minister, Liz Truss, at the state funeral for the monarch who ruled over Britain for more than 70 years.

The Queen died aged 96 on Sept. 8 and tens of thousands of people are expected in London when her funeral takes place at Westminster Abbey on Monday, which has been declared a bank holiday.

Cundy said: “We are implementing a well-planned and hugely complex police operation which is supported by officers from forces all over the UK. Tens of thousands of members of the public have been paying their respects and our priority is to ensure there is a safe and secure set of events.”

He said the funeral would be supported by firearms officers, dog handlers, a marine unit, and the Special Escort Group, and he said the police had already deployed 34 kilometres (21 miles) of safety barriers in central London.

Cundy said so far there had been 34 arrests in connection with the lying-in-state but he said none of those involved anti-monarchist protesters.

Following complaints earlier this week about possible infringements on free speech, Cundy said: “We have ensured all our officers understand that people have a right to protest and our response will be proportionate and balanced. We will only take action where it is absolutely necessary.”

Balancing Freedom of Expression With Dignity of Event

The Assistant Chief Constable of Thames Valley Police, Tim de Meyer, told the same briefing: “We are well-practised and know we have to balance the right of freedom of expression with the dignity of the event.”

De Meyer said Thames Valley Police would ensure the committal of the Queen’s body to the crypt at Windsor Castle was “safe, proper, and dignified.”

Hundreds of world leaders and other VIPs are expected to attend the funeral at Westminster Abbey before the coffin is taken along a special route to Wellington Arch, near Hyde Park Corner, where it will be transferred to a vehicle to be transported to Windsor.

Cundy was also asked if he was concerned about armed bodyguards protecting foreign leaders.

“Specialist officers from the Met and other forces are well-versed in engaging with world leaders and their protection teams. I can’t go into details,” he replied.

In response to a question from The Epoch Times about the dangers of overcrowding in the area around Westminster Abbey, Cundy said: “First and foremost our priority is keeping people safe. The wider operation, of which policing is a part, will be constantly looking and assessing crowds and numbers and watching out for surging and crushing.”

He said police commanders in the CCTV control room would be “constantly monitoring” the crowds and would take steps to ensure areas did not become dangerously overcrowded.

De Meyer said Thames Valley Police would be deploying airport-style screening arches to check for weapons but he insisted they would ensure a “sensible balance to allow crowds to flow and not become frustrated.”

Cundy said they were “very mindful” of the threat of drones and he said 11 individuals had been spoken to about using drones in London, after a no-fly zone was installed across the whole capital by the Civil Aviation Authority.

But when he was asked if the police would be using drones and facial recognition technology, he said it would be “wholly inappropriate” to answer, considering it was a security operation.

Cundy and de Meyer both urged the general public to be vigilant and speak to a police officer if they notice anything out of the ordinary on Monday or in the days running up to the funeral.