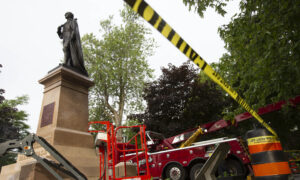 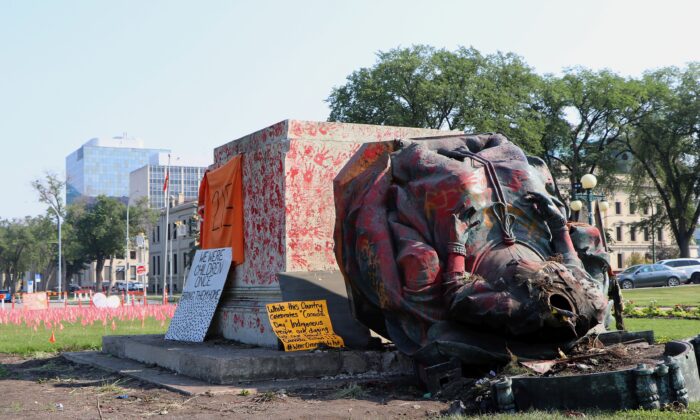 A vandalized statue of Queen Victoria lies on the ground at the provincial legislature in Winnipeg on July 2, 2021. The statue and one of Queen Elizabeth II were toppled on Canada Day during demonstrations concerning indigenous children who died at residential schools. (The Canadian Press/Kelly Geraldine Malone)
Viewpoints

Queen Victoria Is Not Hitler or Stalin, and It Matters

When people vandalize a statue, for instance of Queen Victoria, I confess to a malevolent urge to leave it there as a squalid monument to their utopian vision, as it once was a dignified one to the society they repudiate. It would just make things worse in a “broken windows” manner, encouraging disorder and despair. But we seem to be going that way anyway.

Before you launch into a diatribe against some queen, prime minister, or subway station, I’ll mention a September 1990 “ordinary day in the life of the Soviet Union” item in The Economist ending, “On the late-night news, the announcer says, without a flicker of irony: ‘And now for our daily roundup of attacks on statues of Lenin.’” Which reminds us that there are statues and statues, and different reasons for and manners of removing them.

Many people now apparently struggle to recall that statues of Lenin were, like Stalin and indeed Mao, cruel reminders of a brutal alien ideology imposed by force. I think I’d leave some standing where they were, and move others to dedicated public sites, so people could stare, think “Did we really live like that?” then shudder “Never again.” As parts of the Berlin Wall were left in place, and Auschwitz is today a museum with its infamous gate intact.

By contrast, if there were any Hitler statues in Germany, I’d want them removed to a museum lest people gather there for very wrong reasons. Even though Stalin was no better, and Marxists vastly outnumber Nazis today. I think it’s partly an issue of regime longevity; Lenin statues were a “thing” for decades. But as usual, Queen Victoria is not Hitler or Stalin, and it matters.

Before debating what she was, remember also that removal of statues generally signals a revolution. When Iraq was liberated, people cheerfully pulled down grandiose memorials to Saddam Hussein before alas moving on to less cheerful activities. And in the moment you’d certainly be tempted. But we’re not. Are we?

We haven’t had an official revolution. These protesters still claim the protection of the law made by those whose statues they tear down; if attacked mid-smashdown they’d call the Royal Canadian Mounted Police or some such outfit. Nobody wrecking a Lenin statue would, if assaulted, have shouted “KGB! Help!” except to indicate that some Chekist was punching them. And in Canada they still get that protection because the authorities seem to be part of the revolt.

Thus I will avoid a long digression about problematic statues. For instance at Gettysburg, whose well-preserved battlefield seems to contain more monuments than all of Canada, some large and florid and others modest. Including Confederate ones at the foot of the hill honouring men who with astounding courage and endurance fought and died for… slavery.

Shall we smash their statues and perhaps their bones and obliterate their memory forever? Or weep that, like too many around the world throughout history, they deserved a better cause?

What, indeed, of the Union soldiers? Doubtless they were, being human, a mixed bag in conduct, character, and motives. But they won a great victory for freedom. Except formal abolition did not bring real freedom, or much serious effort to secure it, for another century. Shall we smash their statues, or Lincoln’s?

Some would, erupting into chronic rage against the imperfections of every human being besides themselves past or present, and letting no one else’s rights or opinions thwart their wrath. Which is precisely the psychological makeup of history’s worst tyrants, and the antithesis of liberty under law. And why whatever should be done at Gettysburg, a mob desecrating stuff isn’t it.

Here in Canada I don’t know whether, if we did debate the matter, we would decide no longer to honour Queen Victoria. Her rule was not exactly a modern progressive’s dream. Consider her exclamation to Lord Palmerston: “Change, change, change. All this talk about change, aren’t things bad enough already?” But many of us might admire her anyway, and forgive her trespasses, saying Pax Britannica and habeas corpus clobber the alternatives. Including large numbers who came here, or whose recent ancestors did, to escape genuinely loathsome regimes and repressive customs, and who cannot plausibly be accused of racism and might deplore long-repudiated aboriginal policies while insisting they had no share in them, directly or by inherited guilt. (FYI my first Canadian ancestor arrived in 1907, of very humble British origins.) But we did not debate it.

Instead, these statues are being destroyed in defiance of peace, order, and good government. And the authorities are complicit. The police don’t even try to intervene, anticipating the elite ruckus if they hurt some vandal.

In that sense a dirty, rusty, broken statue lying askew is a fitting monument to the process now underway. But it’s still a bad idea.