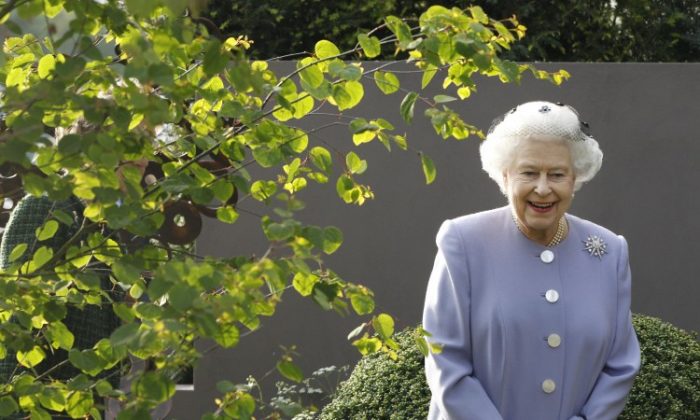 Queen Elizabeth II during a visit to the Chelsea Flower Show at Royal Hospital Chelsea on May 21, in London. (Lefteris Pitarakis/WPA Pool /Getty Images)
Home

Queen Elizabeth II wore her characteristic broad smile as she previewed the 99th annual Chelsea Flower Show in London on Monday, May 21.

Wearing a lilac coat, pearl jewellery, and a tulle headpiece with a black flower motif, she beamed at the lush colours of the varied gardens and display stands that were vying for the judges’ medals on the following day.

Also pursuing future medals were Olympic fencers James Honeybone and Alex O’Connell, who demonstrated their skills for the Queen in full Team GB fencing kit with masks striped with the red, white, and blue of the UK flag.

After smiling at their cut and thrust routine, the Queen talked to the athletes.

The Daily Mail reported O’Connell, 24, to have said: “She asked whether it got hot and whether it was hard work.

“She spoke about the flower show and said she had heard that fencing was up and coming.

“She also said for the girls it was quite a ladylike sport and made a little fencing gesture with her hand.”

It is the first time that fencing has been in Ranelagh Gardens for 70 years, according to the Royal Horticultural Society (RHS).

The fencers were sparring in an exhibit entitled “Duel and Crown” by Hillier Nurseries and Garden Centre from the South of England.

Hillier Nurseries won gold on Tuesday for the 67th year in a row.

The Nurseries have another connection with the Olympics as the company has supplied nearly 4,000 British-grown trees to the Olympic Park for London 2012.

Their Chelsea Flower Show display was one of a number of exhibits referring to the Queen’s patronage of the show run by the RHS – and to the celebration of the Queen’s Diamond Jubilee, which will take place around the extended weekend of June 2nd-5th.

There was an exhibit from the Parish of St Helier Gardens in Jersey displaying the words THE QUEEN’S DIAMOND JUBILEE in capitals in shades of green. On top was a four-sided revolving facsimile of the £2 Jersey stamp showing the Queen’s profile.

There was also a shrub rose called “Royal Jubilee” (“Ausparade”), which the RHS website states has thornless stems and “produces rounded, globular, deep-pink blooms in large clusters which, when fully open, display golden stamens in the centre of the flower. Fragrance is fruity, resembling blackcurrant tea.”

As Patron of the RHS, the Queen has attended previews regularly for over 40 years.
The Press Day on the first Monday is followed by two private views for RHS members. It is open to the public until Saturday, May 26, when bargains can be had as many participants begin to dismantle their exhibits.

The aim of the exhibitions is “to encourage amateur gardeners of all standards to try to achieve similar displays in their own gardens”, according to the British Monarchy website.

Many exhibits cost thousands of pounds and are sponsored by various companies like insurers Beazley, which sponsors the British Fencing team and has operations in Europe, the United States, Asia, and Australia.