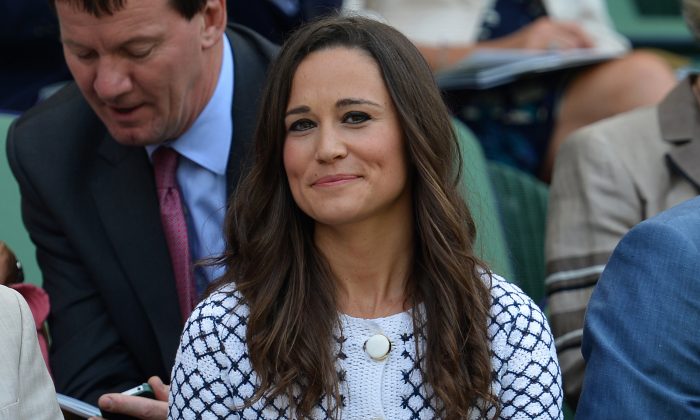 Pippa Middleton (C) sister of Britain's Catherine Duchess of Cambridge, sits in the Royal Box on Centre Court on day four of the 2012 Wimbledon Championships tennis tournament at the All England Tennis Club in Wimbledon, southwest London, on June 28, 2012. (AFP/GettyImages)
Entertainment

Both Prince William and Kate Middleton, the Duchess of Cambridge, aren’t pleased with her sister, Pippa, over reports that she might accept a job with NBC as a correspondent.

Throughout the years, the royal family has had a tense relationship with the media–namely paparazzi photagraphers and websites publishing rumors cited insiders.

A report from gossip site Celeb Dirty Laundry claims that “as Pippa Middleton comes close to accepting the NBC media correspondent offer, Kate Middleton is being torn between devotion to her family and her devotion to the royal family.”

The site posted photos of Kate appearing “strained” in new photos, but it’s worth noting that she’s had to deal with a rare form of morning sickness due to her pregnancy, and she has not felt well in recent weeks, according to reports.

And it’s also worth noting that the site has a sometimes spotty record with its reporting, and it can be difficult to determine whether its merely speculation or not.

“Queen Elizabeth and Prince William will insist that Kate Middelton to keep her distance from greedy Pippa is she goes ahead and becomes a correspondent for the Today Show,” reads another report from the site.

It claims that if Pippa does get the job, it will be a “conflict of interest” because “Today and NBC will get their own inside scoop on everything royal.”

This week, the New York Post’s Page Six reported that Pippa would be offered a role on the Today show. It cited sources close to the talks.

“‘Today’ has been doing a test piece with Pippa in Utah, and if it works out well — and it looks like it will — they will hire her as a correspondent,” the source told the paper.

Added another source: “NBC, along with all the major networks, has been trying to sign Pippa for some time.”

But it’s unclear if Pippa, 31, has actually taken the job yet.

Said another insder, “The deal with NBC isn’t done yet, but everybody is hopeful it will be done very soon. They want to make sure Pippa is comfortable in this role. The ratings for Pippa’s interview with Matt Lauer showed she is very popular with ‘Today’ viewers, and she really impressed everyone at NBC.”