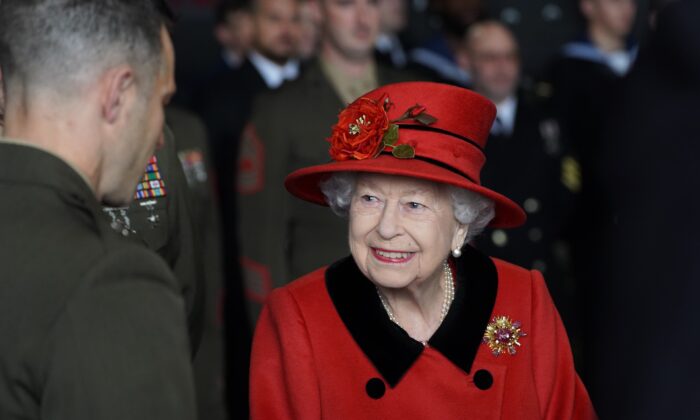 Queen Elizabeth II talks to military personnel during a visit to HMS Queen Elizabeth at HM Naval Base ahead of the ship's maiden deployment, in Portsmouth, England, on May 22, 2021. (Steve Parsons - WPA Pool / Getty Images)
UK

Queen Elizabeth II won’t attend the State Opening of Parliament and her reading of the Queen’s speech this year, announced Buckingham Palace on Monday.

It’s the first time since 1963 that the Queen, 96, will not attend the traditional occasion. Instead, Prince Charles will deliver the speech on Tuesday, according to the announcement.

“The Queen continues to experience episodic mobility problems, and in consultation with her doctors has reluctantly decided that she will not attend the State Opening of Parliament tomorrow,” Buckingham Palace said in a statement.

“At Her Majesty’s request, and with the agreement of the relevant authorities, The Prince of Wales will read The Queen’s speech on Her Majesty’s behalf, with The Duke of Cambridge also in attendance,” the statement added.

The State Opening of Parliament is the event that signals the start of the uk’s parliamentary year. The Queen’s speech sets out the agenda of the government and is usually read by the monarch.

In response, UK Prime Minister Boris Johnson’s office told the BBC that “the prime minister fully respects the wishes of Her Majesty and is grateful to the Prince of Wales for agreeing to deliver the speech on her behalf.”

Queen Elizabeth II has attended only a small number of public events in recent months. However, she continues to hold virtual audiences on a regular basis.

Several days ago, Buckingham Palace announced she would not attend the royal garden party season, where she would meet with people at her residences in London and Edinburgh. Other members of the Royal Family will attend those events instead, said Buckingham Palace.

But when speaking during an event last month, she revealed that the virus leaves “one feeling very tired and exhausted … this horrible pandemic.”

In October 2021, the monarch spent one night in a hospital and conducted light duties for weeks afterward due to doctors’ orders and tests. The palace did not specify what tests were carried out. Before that, the Queen was hospitalized in 2013 when she was 86.

It’s now been about a year since her husband, Prince Philip, died at the age of 99. Philip was the longest-serving British consort.