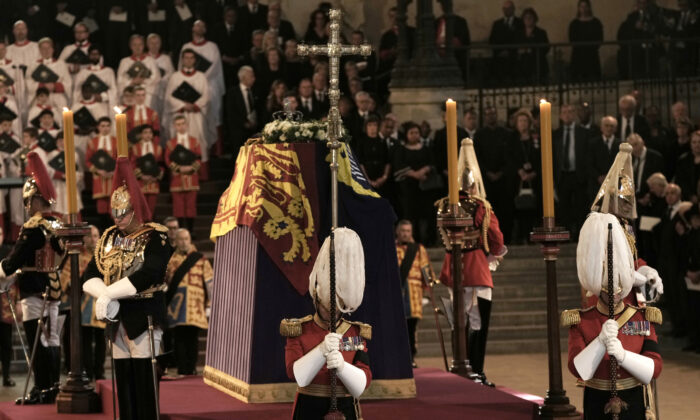 Queen Elizabeth II, who died in Scotland on Thursday, is now lying in state in London’s Westminster Hall for a four-day vigil until her funeral on Monday.

Huge crowds gathered in central London on Wednesday to witness the Queen being taken from Buckingham Palace to Parliament as artillery guns fired salutes and Big Ben tolled.

Her coffin was carried on a horse-drawn gun carriage that had borne the coffins of her mother and father, in a procession through the heart of the British capital watched by tens of thousands who lined the route.

King Charles III led the royal family as they walked behind the coffin, which was draped in the Royal Standard and topped with the Imperial State Crown—encrusted with almost 3,000 diamonds—and a bouquet of flowers and plants, including pine from the Balmoral Estate, where the Queen died on Sept. 8 at the age of 96.

Guns fired every minute at Hyde Park, while Big Ben also rang at 60-second intervals. The crowds stood in a hushed silence as they watched the procession but then broke into spontaneous applause when it passed. Some threw flowers.

Westminster Hall was opened to the public at 5 p.m. to offer mourners the opportunity to say a personal farewell ahead of the Queen’s funeral on Monday, but thousands of people had taken their spots in the queue well in advance.

According to the live queue tracker run by the Department for Digital, Culture, Media and Sport, the line was already 2.5 miles long when the door opened.

The line has the capacity to stretch back 10 miles, with no guarantee that everyone who joins it will get to file past the late monarch’s coffin.

There will be more than 1,000 volunteers, stewards, marshals, and police officers on hand at any one time as people brave the wait on the banks of the River Thames.

Also on Wednesday, U.S. President Joe Biden spoke to King Charles to offer his condolences on the death of his mother.

Biden recalled the Queen’s “kindness and hospitality” when she hosted him and the first lady at Windsor Castle in June, the White House said in a statement.

“He also conveyed the great admiration of the American people for the Queen, whose dignity and constancy deepened the enduring friendship and special relationship between the United States and the United Kingdom,” the statement said.

PA Media, Reuters, and the Associated Press contributed to this report.