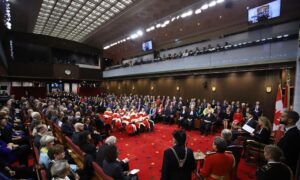 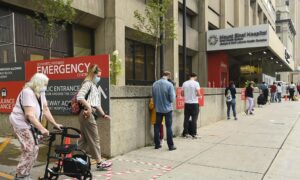 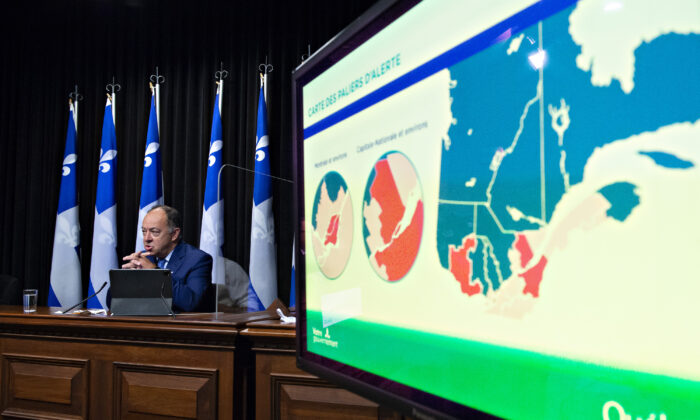 Quebec Health Minister Christian Dubé speaks during a news conference on the COVID-19 pandemic at the legislature in Quebec City on Sept. 24, 2020. (The Canadian Press/Jacques Boissinot)
Canada

Quebecers Urged to Cancel Thanksgiving Gatherings Due to COVID-19

Quebecers are being urged by the province’s health minister to cancel their plans for gatherings with friends and family over the next few weeks, including Thanksgiving dinner.

“If I have a choice I would prefer cancelling a lot of those in the next few weeks to make sure we have a nice Christmas,” Christian Dubé said on Sept. 24.

With COVID-19 cases rising in the province, Dubé said the coming weeks will be critical in avoiding another shutdown.

“Regardless of the colour of the zone you are in right now, you can make a difference, by breaking that wave … by limiting your social contacts in the next few weeks,” he said.

Dubé  was referring to the new colour-coded alert system with four levels that lets people know how each region is doing in containing the COVID-19 virus.

Currently, Montreal is zoned orange, which is the third-highest level out of four levels.

Green denotes Level 1 which calls for basic measures. It indicates that the community spread is weak. People should still follow all public health measures, such a wearing a mask, social distancing at 2 metres apart, washing their hands, covering their face when they cough or sneeze, and avoid physical contact such as shaking hands.  For private gatherings, both indoor and outdoor, there maximum is 10 people. For public gatherings the maximum is 50 people for indoor events, 10 patrons per table, and 250 people for outdoor events.

Yellow denotes Level 2 which calls for strengthened basic measures. Yellow indicates that community transmission is starting to increase, so triggers more inspections and more crowd control to make sure that people are keeping their distance. There are no new restrictions at this level. The same numbers apply at the yellow level for private and public gatherings as apply at the green level.

Orange denotes Level 3 which calls for intermediate measures.  Orange means that transmission is getting quite severe.  At this level the government will start placing new restrictions on public and private gatherings.  For private gatherings at the orange level the maximum number is six people or two families. Public settings such as rented halls allow for a maximum of 25 people with no alcohol sales after 11 pm. Public venues can have a maximum of 250 people, with six patrons per table.

Red denotes Level 4, the highest alert level, which calls for maximum measures. Red warns that transmission of the virus has gotten severe. More restrictive measures will be brought in but will not return to the kind of lockdown that people saw in the first wave if this can be avoided. If a red level is reached, restrictions could extend to prohibiting non-essential activities.

Health authorities are advising people who have symptoms of virus infection to seek immediate medical attention or go to a testing centre.

As for testing, people have had to endure long lineups in several provinces to receive a swab to help diagnose COVID-19, and then wait for days to get the results.

Saliva tests that produce results in minutes are being developed. Health Minister Patty Hajdu has said Health Canada isn’t yet satisfied that the testing systems it has reviewed have met the standard for accuracy.

Wednesday’s throne speech said the government is “pursuing every technology and every option for faster tests for Canadians.”

“Canadians should not be waiting in line for hours to get a test,” said the speech, read by Gov. Gen. Julie Payette.

Ontario Premier Doug Ford said on Friday that Ontario will begin offering testing in up to 60 pharmacies across the province, starting immediately.