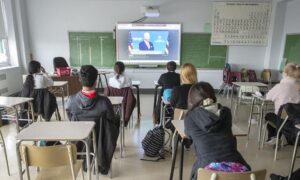 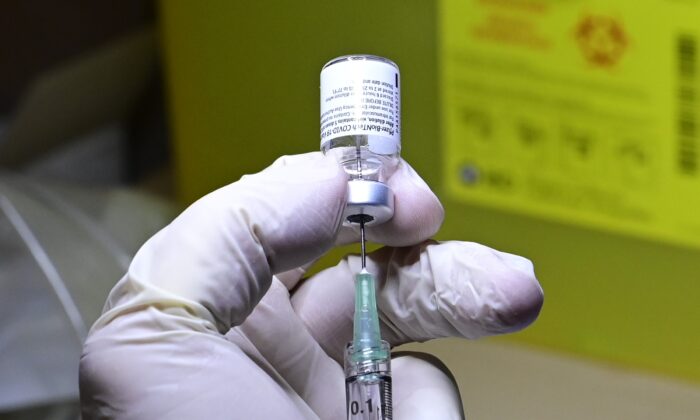 A COVID-19 vaccine is prepared to be administered at a hospital in Toronto on Dec. 14, 2020. (Frank Gunn/The Canadian Press)
Canada

Quebec will continue to administer COVID-19 vaccine doses, despite calls for a change in plans following an Israeli report showing the Pfizer-BioNTech vaccine having lower than expected efficacy.

“The game plan remains the same, despite new info from Pfizer. Goal has 225k as of February 8. The principle remains: we vaccinate the most people as quickly as possible,” Quebec Health Minister Christian Dubé wrote on Twitter.

Last week, the Quebec government announced a plan to delay 90 days before administering the second “booster” dose to people who were given the first shot of the COVID-19 vaccine. The strategy was meant to give the first shot to other more vulnerable seniors.

However, Israeli health experts have recently revealed the efficacy of the first shot.

Nachman Ash, an Israeli guru on the CCP (Chinese Communist Party) virus, told the Hebrew-language media Army Radio that a single dose of the vaccine was “less effective than we thought,” on Jan. 19, according to a report by Israeli news channel i24 News.

“Many people have been infected between the first and second injections of the vaccine,” he said.

After Ash’s comment raised public concerns, the Israeli Health Ministry clarified to BBC that it was taken out of context and therefore inaccurate.

“The commissioner said we have yet to see a decrease in the number of severely ill patients,” the ministry said. A spokesperson added that the “full protective impact of the vaccine” can be expected soon.

Since December 2020, Israel has administered the first shot to over two million citizens, or about a quarter of its population. Through an agreement with Pfizer-BioNTec, Israel secured rapid delivery in exchange for tracking the effects of the vaccine for the manufacturer.

Pfizer previously announced that the vaccine demonstrated a 90 percent efficacy in preventing the CCP virus on trial participants.

However, in the real world, the first dose of the vaccine only has shown an efficacy rate of 33 percent, according to an article published in BMJ British medical journal earlier this month.

The finding has led public health experts to call on the Quebec government to reflect on the decision to delay giving the booster dose.

“The personal and population risks have even greater relevance and urgency for Quebec given the real-life data reported from Israel,” John Robertson, co-author of the article and professor of surgery and consultant surgeon at the University of Nottingham, told CTV.

“The second dose should be given on Day 22 as in the Phase 3 trials and approved by regulatory agencies worldwide,” he said.