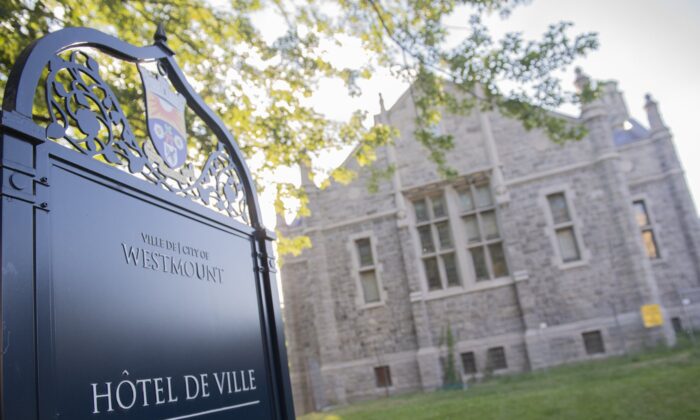 A bilingual sign for City Hall is shown in the city of Westmount, on the island of Montreal, Aug. 5, 2022. (The Canadian Press/Graham Hughes.)
Canada

Quebec’s new language law has dozens of municipalities in the province shoring up their bilingual status, with few considering giving up the right to serve their citizens in both English and French.

Almost 90 cities, towns or boroughs in Quebec are considered officially bilingual, a designation allowing them to offer services, post signage and mail communications in the country’s two official languages. Jurisdictions without this status must communicate only in French, with few exceptions.

Bill 96, the new language law that came into effect June 1, proposes that a municipality’s bilingual status be revoked in places where fewer than 50 percent of citizens have English as a mother tongue. However, a bilingual town or city can avoid losing its status by passing a resolution within 120 days of receiving notice from the province.

Scott Pearce, the mayor of the township of Gore, north of Montreal, said choosing to remain bilingual was an easy decision for his town of just over 1,700 people.

“We were founded here by the Irish in the 1800s, so it’s part of our history — speaking English and English culture,” he said in a recent interview.

While the percentage of residents in Gore who speak English as a mother tongue has dropped from over 50 percent to around 20 percent, he said maintaining bilingualism is popular among French-speaking and English-speaking citizens alike.

Language, he said, “has never been an issue here.”

Pearce, who represents bilingual municipalities at the province’s federation of towns and cities — Fédération Québécoise des municipalités — said most of the mayors he’s spoken with plan on passing similar resolutions, or have already done so.

“I talked to mayors from all over the province, and they’re really proud of the bilingual status and how their communities — English and French — get along,” he said.

While Bill 96 has been criticized by groups representing English-speakers, Pearce, who is married to a sitting legislature member, says he believes that in this instance, the governing party has done the towns a favour by giving them an easy way to formalize their status.

The Canadian Press reached out to all the bilingual municipalities and boroughs to ask them whether they have passed, or plan to pass, a resolution to keep their status. Of more than two dozen that responded, all but three said they intended to remain bilingual. The others said they were still studying the law or declined to comment. None said they planned to give up being considered officially bilingual.

A spokesperson for the province’s language office, the Office québécois de la langue française, said in an email that notices would be sent “shortly” to towns that no longer meet the 50 percent threshold.

While they can offer services in English, “a municipality recognized as bilingual must nevertheless ensure that its services to the public are available in the official language of Quebec, French,” Nicolas Trudel wrote in an email.

The official purpose of Bill 96 is to affirm that French is Quebec’s only official language and “the common language of the Québec nation.” But four mayors who spoke to The Canadian Press by phone, as well as many of those who responded by email, all said the decision to operate in two languages was unanimous among city council and raised little to no debate among citizens.

He said his town, which falls below the 50 percent threshold, hasn’t yet passed a resolution but will do so once it receives a notice.

Kirkland, a city in the Montreal area, described bilingualism as a “core value in all aspects of municipal life,” while Ayer’s Cliff, Que., in the Eastern Townships, said it was “essential to the character of the municipality and as testimony to the historical presence of the two communities, anglophone and francophone.”

Otterburn Park, a town 40 kilometres east of Montreal, said it wanted to keep its bilingual status despite only 5.7 percent of its population reporting English as a mother tongue in the last census.

“The English-speaking population is largely made up of seniors,” Mayor Mélanie Villeneuve wrote in an email.

“With a view to providing quality service, particularly to more vulnerable groups of people, we believe it is important to be able to communicate with English-speaking citizens in the language that works for them.”

Several of the mayors expressed hope that the choice to remain bilingual would be accepted as permanent and that they wouldn’t have to pass new resolutions every time there’s a census.