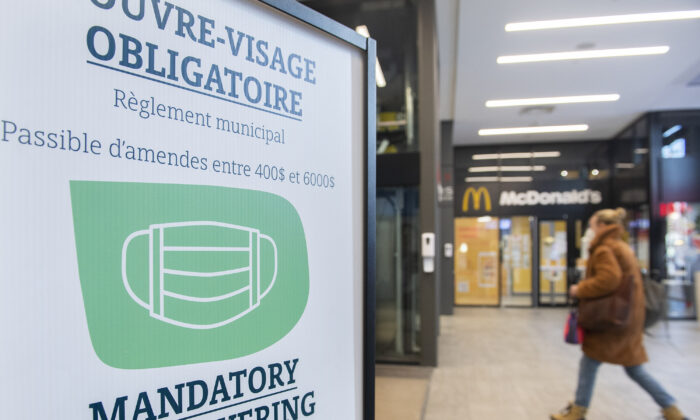 A woman walks by a sign reading 'Mandatory Face-Covering', in Montreal, on Dec. 19, 2021. (The Canadian Press/Graham Hughes)
Canada

Quebec is planning to lift its mask mandate in public spaces by mid-April and remove most other COVID-19 measures earlier than previously announced.

The Quebec government said in a March 2 release that as of March 12, all public places can return to 100 percent capacity and resume normal business hours, with no table capacity limits in restaurants, bars, taverns, and casinos.

By that date, proof of vaccination will no longer be required to access the places where it was previously instituted.

Restrictions on the number of participants for social activities in a rented room will also be lifted, as well as the registration requirement for visitors to private seniors’ residences.

Relaxation of the public health measures comes two days ahead of the original schedule of March 14, following recommendations from Quebec’s Minister of Health and Social Services Christian Dubé.

“Within ten days, most of the measures will finally be lifted. This is a very important step, and we can be proud of all our efforts to achieve this. However, we must learn to live with the virus, which is still circulating, and remain cautious,” he said in the release.

“Wearing a mask, even when it is no longer compulsory, will, among other things, be part of the arsenal we have to reduce the risk of transmission in certain circumstances.”

The province has proposed a gradual withdrawal of its masking requirements, though the specific dates were not released and will be confirmed later based on “the evolution of the epidemiological situation,” the health ministry said.

The statement noted mandatory masking will be dropped in all public places “by mid-April at the latest,” with 10 days’ notice before the mandate is lifted. Public transportation is the only exception where masks will still be required, which will be lifted “at the earliest in May.”

On March 2, Quebec’s public health research institute said in a news release that the province’s gradual reopening plan should not cause a significant rise in new COVID-19 infections or hospitalizations in the greater Montreal area, compared to the peak in January 2022.

The Institut national de santé publique du Québec (INSPQ) said these projections—made by the INSPQ and a research group from Laval University—showed that vaccination coverage coupled with the fact that many people were infected by the Omicron variant should keep new cases and hospitalizations relatively low at least until May.

Marc Brisson, director of the Laval University research group in mathematical modelling and health economics related to infectious diseases, said Quebec still needs to be cautious and monitor new variants as well as vaccine efficacy. He estimated that if the Omicron subvariant BA. 2 is 1.4 times as contagious as the original Omicron mutation, Quebec could see a rise in new hospitalizations and COVID-related deaths in March.

“We made projections in the event that the BA.2 variant would be 1.4 times more transmissible than Omicron. The model predicts that cases, new hospitalizations and deaths could increase in March, but would not reach the peaks seen in January 2022 even under a pessimistic scenario,” he said in the March 2 statement.

On March 3, Quebec saw a continued drop in COVID-19 hospitalizations, with a further decrease of 17 people being admitted to hospital, resulting in a current total of 1,364.