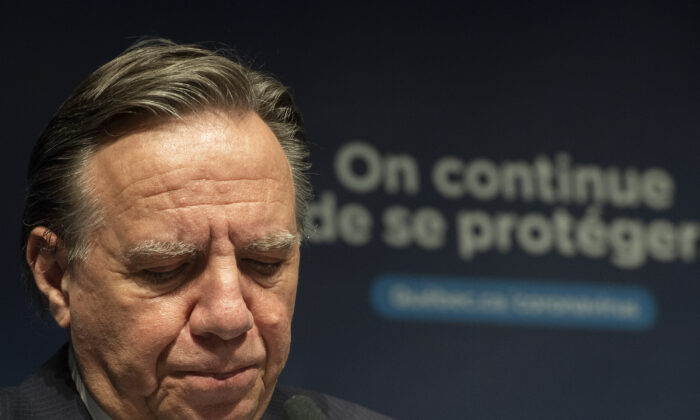 Quebec Premier Francois Legault speaks during a news conference in Montreal, on Dec. 22, 2021, where he gave an update on the ongoing COVID-19 pandemic. (The Canadian Press/Graham Hughes)
Canada

Starting Dec. 26, the current 10-person limit for gatherings in private homes will shrink to six people or two-family bubbles, Legault said during a press conference.

Restaurants, which are already operating at half capacity and required to close at 10 p.m., will also have to reduce table seats to six people or two families.

“Until Saturday, we’re letting people who absolutely want to gather, but I invite all Quebecers who can put off their gatherings to do so,” he said.

This was the third time in less than a week that Quebec has announced new restrictions in face of the spread of the new Omicron variant.

While Quebec’s public health institute said on Dec. 21 that the more transmissible Omicron variant is accounting for more than 80 percent of new infections in the province, Dube said the Delta variant still accounts for the majority of those hospitalized with COVID-19 in Quebec.

Legault also said on Dec. 22 that the province is accelerating its vaccination campaign for people aged 60 and older, who account for 70 percent of those in hospital.

The Institut national de sante publique du Quebec said on Dec. 22 that the environment was favourable for the spread of the Omicron variant in Quebec, when social contacts increased following the lifting of public health measures in November.

Eric Litvak, vice-president of scientific affairs at the institute, said that even with the measures and restrictions announced earlier this week, hospitals could still overrun capacity, adding that there remains uncertainty surrounding the actual severity of Omicron.

“It’s still very early, and when you look at the global situation, the rapid rise of Omicron cases is still very recent. It’s a matter of days,” Litvak said.

“I think it’s really too early to be able to reach any clear conclusions on how bad it might be in terms of hospitalizations, and the following seven, 10, 14 days are going to be extremely valuable to try to better understand that.”