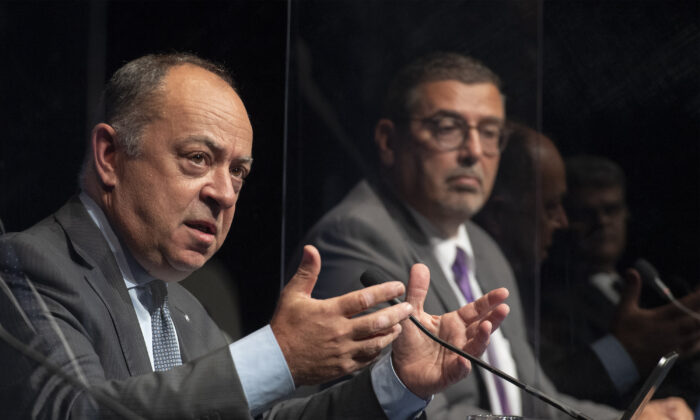 Quebec Minister of Health Christian Dube (L) and Daniel Pare, head of the Quebec vaccination program speak during a news conference in Montreal on Aug. 24, 2021. (The Canadian Press/Graham Hughes)
Canada

The Quebec government has announced that COVID-19 vaccines will not be mandatory for teachers and school staff in the province.

Quebec’s Ministry of Health and Social Services said in a statement on Oct. 27, that vaccination will not be compulsory for school personnel in public and private preschool, primary and secondary schools, following recommendations from public health authorities.

According to the ministry, the decision is based on the improving epidemiological situation in the province, with the impacts of COVID-19 in children getting weaker, and outbreaks “well controlled in schools.”

In public and private primary and secondary schools, 91 percent of the staff have received at least one dose of a COVID-19 vaccine, and 89 percent have received two shots, according to the statement.

“Taking into account the history of COVID-19, 89% of staff are adequately protected,” the statement reads.

The ministry said vaccination campaigns were organized in schools where vaccination rates “were not high enough.” The health and social services network said they are also preparing to vaccinate children between 5 to 11 years old.

In a separate statement released Oct. 27, the Ministry of Health and Social Service also confirmed that vaccine mandates will not be enforced for staff in higher education, saying staff in college and university-level institutions have a high vaccination rate of 92 percent.

The vaccination rate among students in higher education is also high, with 90 percent of college students and 92 percent of university students who are “adequately protected against COVID-19.”

The provincial government previously gave health care workers until Oct. 15 to receive a COVID-19 dose or face suspension without pay, but later announced an extension to Nov. 15, due to concerns about medical staff shortages.

Quebec Premier François Legault raised the possibility this week of further postponing the deadline for a second time.

Superior Court Justice Michel Yergeau, who is hearing the arguments today, said he will render a decision on Nov. 15 regardless of what the government decides.