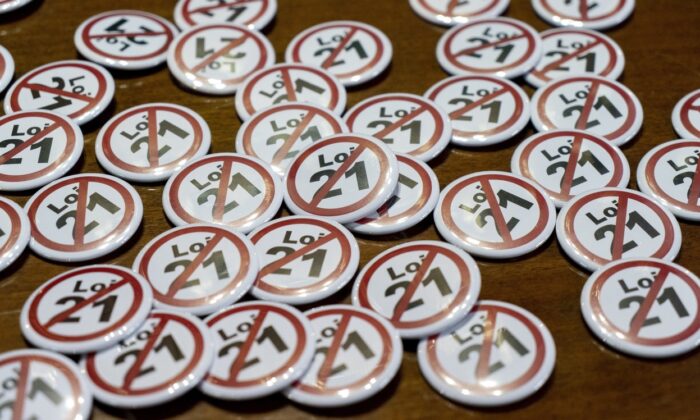 Badges are seen as part of a campaign in opposition to Quebec's secularism Bill 21 during a news conference in Montreal on Sept. 5, 2019. (The Canadian Press/Paul Chiasson)
Canada

The Quebec Court of Appeal will not allow the English Montreal School Board to hire teachers who wear religious symbols while an appeal of a lower court decision on Quebec’s secularism law is being decided.

The school board had sought to have a Superior Court decision that exempted English-language school boards from the law, which bans the wearing of religious symbols by teachers and other government employees in positions of authority, come into effect immediately.

Justice Frédéric Bachand wrote in his ruling issued today that the school board did not prove it would suffer serious or irreparable prejudice if the law, known as Bill 21, is applied while the government appeal is ongoing.

He found that the school board’s claim the enforcement of the bill would suppress minority cultures went too far and that it did not prove applying the law would harm the integration and education of students.

While he found the school board did show evidence the bill will make it harder to hire staff at a time when it is facing a shortage of qualified teachers, the government was able to demonstrate that there are teachers available.

In a statement, the school board said it is disappointed with today’s decision.