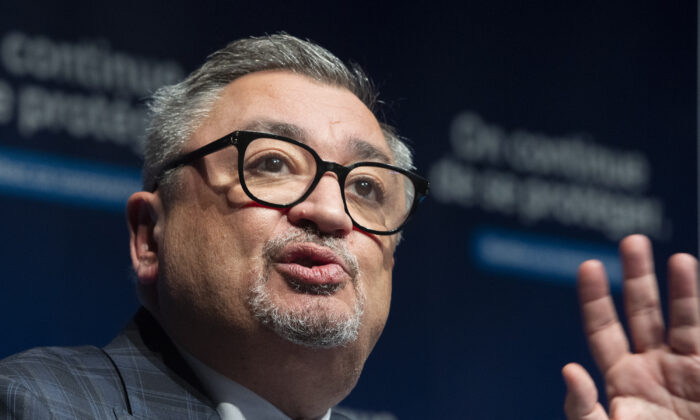 A series of emails obtained by Radio-Canada revealed that Quebec’s former public health director was looking for scientific explanations to justify imposing a curfew mere hours before the province announced on Dec. 30, 2021, that it would enforce the measure on New Year’s Eve.

It was the second curfew in Quebec since the pandemic began.

In an email time-stamped at 10:31 a.m. on Dec. 30, 2021, the assistant to Dr. Horacio Arruda wrote to Quebec’s public health institute and Marie-France Raynault, a senior strategic medical adviser for the province’s public health, asking them to come up with an “argument” that could help the government justify the need for a second curfew provincewide at a press conference later that day, reported Radio-Canada on March 2.

“Horacio would like you and your teams (!) to provide him with an argument in relation to the curfew in anticipation of questions from journalists at the 5 p.m. press conference this evening,” Renée Levaque wrote.

“Dr. Arruda wants to know two things: 1) What are the studies? 2) What is being done elsewhere?”

He wanted it all “in a tight argument,” she added.

“On the INSPQ side, we don’t have an existing analysis that specifically addresses the curfew and we are unfortunately unable to produce one today with such short notice,” he wrote—less than three hours before the press conference commenced.

Litvak, however, did send over some studies that he had used to back his suggestion for the first curfew, imposed on Jan. 9, 2021.

The province’s health ministry shared four of those studies in a press release issued that same evening: two from France, one from Ontario, and another one from Jordan, which examined the effects of curfew in those locations.

“Since the beginning of the COVID-19 pandemic, the government’s decisions have been largely based on the opinions of experts,” the press release said.

On Jan. 10, Arruda tendered his resignation, citing a “certain erosion” in public support for health measures.

“Recent comments about the credibility of our opinions and our scientific rigor are undoubtedly causing a certain erosion of public support,” Arruda wrote in a letter. “In such a context, I consider it appropriate to offer you the possibility of replacing me before the end of my term of office.”

Radio-Canada reported it also questioned the health ministry under the “Act Respecting Access to Documents” in January what studies the ministry had used to determine that a curfew was effective in slowing down the spread of COVID-19.

The ministry replied on Feb. 7 that it is not their mission to “conduct scientific research or improve legal argument.”

“The decisions adopted are based on evidence collected by various organizations, including the Institut national de santé publique du Québec (INSPQ) and the advice of experts from other organizations,” the ministry said.

In another request to INSPQ by Thomas Gerbet, a journalist at Radio-Canada, on the efficacy of Quebec’s vaccine passport and curfew, the institute said it has “no documents” to prove that.

“We do not have any documents to this question,” said the institute, whose reply was posted by Gerbet on Twitter on Feb. 9.

During the press conference on Dec. 30, 2021, Premier Francois Legault said the use of curfew was necessary because the COVID-19 situation in Quebec was dire.

“It’s an extreme action to take because the situation is extreme,” he said.

“We have to act rapidly, the situation is evolving rapidly,” the premier added. “As deciders, we have the responsibility to act. We can wait for all sorts of studies and more details, but it’s better to act and adjust a little later.”

A day before Legault’s announcement, Radio-Canada obtained another email exchange that showed an ethical opinion was circulated internally among government officials, but the two-page document was completely redacted.

It was a formal request by Montreal’s public health director Dr. Mylène Drouin, who asked Arruda for an ethical assessment of the curfew—something which she was against due to its effect on the vulnerable populations.

The media outlet said it is not possible to know whether an actual assessment was conducted eventually as the document was being redacted.

In an email statement to The Epoch Times on March 2, the health ministry said that “observational studies” show curfew can prevent gatherings, which “proved useful at a time when the number of cases remained high among the general population.”

“The curfew, when it was applied, certainly had a dissuasive effect on the population from going out after a certain hour,” spokesperson Marjorie Larouche wrote.

She added that most public health decisions are discussed between provincial and regional officials. Different views are taken into account, but officials at the provincial level have the final say.

“We are of the view that the curfew is a severe measure which should apply only when other transmission reduction measures have been put in place and do not demonstrate the desired effects as was the case at the beginning of the month of January,” she said.

Noé Chartier, Andrew Chen, and The Canadian Press contributed to this report.