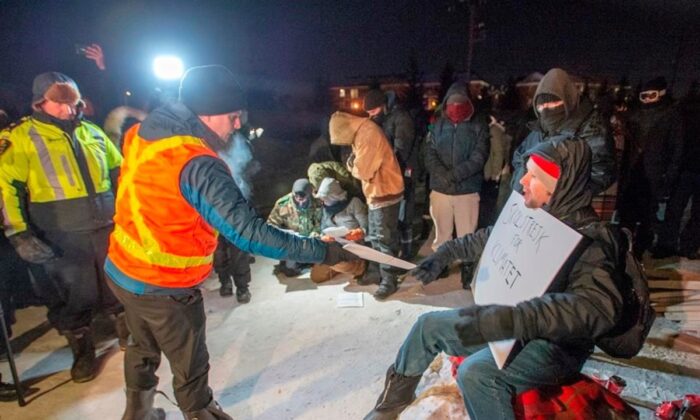 Police serve an injunction to protesters at a rail blockade in St. Lambert, south of Montreal, on Feb. 20, 2020. (Ryan Remiorz/The Canadian Press)
Canada

About two dozen protesters at a railway blockade south of Montreal are continuing to defy an injunction ordering them to leave, while the Quebec premier is calling on the police to enforce the decree.

Police patrols passed by the blockade in St. Lambert, Quebec, regularly overnight but there was no sign of a mobilization on Friday to eject the protesters from the site on Canadian National Railway tracks.

The protesters, who say they are blocking the rail lines in solidarity with Wet’suwet’en hereditary chiefs in British Columbia, refuse to identify themselves. Their actions have interrupted rail service for suburban commuters and for Via Rail travellers between Montreal and Quebec City.

“The cause is much bigger than individuals,” one protester who declined to give his name said Thursday night. “Our identities are anecdotal; we are here to listen to the Wet’suwet’en.”

The Wet’suwet’en’s hereditary chiefs oppose the Coastal GasLink project that would bring natural gas to a liquefaction facility and export terminal on the B.C. coast. But others in the community do support the project, including 20 First Nations bands along the route that have signed agreements with the company.

Countrywide protests and blockades followed a move by the Royal Canadian Mounted Police (RCMP) to enforce a court injunction earlier this month against the hereditary chiefs and their supporters, who had been obstructing an access road to a Coastal GasLink work site. Twenty-eight people were arrested, including one hereditary chief.

The St. Lambert protesters said they will continue to block the railway until the RCMP leave the Wet’suwet’en territory. But their motivations to camp out in the freezing cold are also tied to the fight against climate change.

The injunction granted to CN by Superior Court Justice France Dulude authorizes “any police services or peace officers” to assist the company in executing the order in St. Lambert. But with a barrel fire going Friday morning and supporters bringing coffee and muffins, the protesters don’t seem ready to leave.

Quebec Premier Francois Legault told reporters he will leave it to police to enforce the injunction, but he hopes the blockade will be removed “rapidly.”

“We need these tracks for transporting cargo, to avoid job losses, to avoid losses for companies,” he said. “The law has to be respected, and obviously I hope it is done in an orderly fashion.”

The premier estimated the losses to the Quebec economy of the rail blockades at up to $100 million dollars a day.

“It’s a lot of money, and already, there have started to be layoffs at [Canadian National] and in some manufacturing companies.”