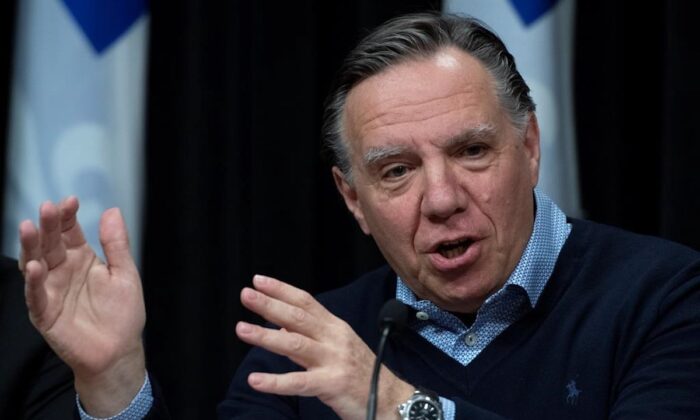 Quebec’s premier issued an order on Sunday urging a number of public gathering places such as bars, theatres, gyms and cinemas to close their doors for two weeks in a bid to contain the spread of COVID-19.

Francois Legault’s announcement came amid a number of other more aggressive measures aimed at curbing the global pandemic, which has sickened 39 people in the province as of Sunday afternoon.

Legault said restaurants were allowed to stay open but were being asked to limit the number of clients to 50 per cent capacity. He said the measure is directed at entertainment and recreation facilities, and did not extend to office towers or stores for the moment.

Legault said Quebecers should try to stay at least one metre away from other people and limit their activities outside the home.

“What I say to Quebecers is we have to limit outings,” he said. “We should go out only to work, buy bread, go to the pharmacy, get health care, take a walk or go help people age 70 and up.”

He acknowledged the changes would disrupt Quebecers’ routines, but insisted “what we are doing right now will save lives.”

He said the measure was intended to ensure that people didn’t “move the problem elsewhere” by seeking new places to gather in light of the decision to close the province’s schools and daycares for the next two weeks.

“Do what we say, please, I implore you, for your health and the health of your co-citizens,” he said, hands clasped in front of him.

Legault said he would also like to see the border closed to foreign tourists, and will continue to discuss the issue with the federal government.

The province announced 11 new cases of COVID-19 on Sunday morning. By 4 p.m., they announced four more.

The cases announced Sunday included two in the Quebec City region, two in Mauricie—Centre du Quebec and two in the Monteregie region southeast of Montreal, as well as one non-resident who was tested in the province.

Three patients in the province are hospitalized, Legault said.

Most people diagnosed with COVID-19 experience mild or moderate symptoms, such as fever and cough, and the vast majority recover. However, the illness can be much more severe for some, including Canadians aged 65 and over and those with compromised immune systems or pre-existing conditions, and officials have stressed the need to minimize the spread of the virus in order to stay within the capacity of the health system.

Arruda said there are currently no known examples of community transmission in Quebec.

The news prompted an association representing the province’s ski hills to announce it was suspending its operations. Loto-Quebec also announced it was disconnecting its video-lottery terminals—a point rendered largely moot given the bar closure.

While some institutions are electing to close, others are adapting. With Sunday services cancelled, Montreal Archbishop Christian Lepine delivered a “solidarity mass” in front of empty pews at Montreal’s cavernous St-Joseph’s Oratory, which was broadcast live on television and the Internet.

Later Sunday, the government announced it was maintaining daycare service for the children of health care workers and others who provide essential services, such as police and firefighters. The services would be free and be held in existing daycare facilities, Families Minister Mathieu Lacombe said.

School-based daycares will also open in 400 locations to receive children between the ages of 4 and 13, the government said.

The locations, which were chosen based on their proximity to health-care facilities, can accept up to 60,000 children, the government said in a news release.