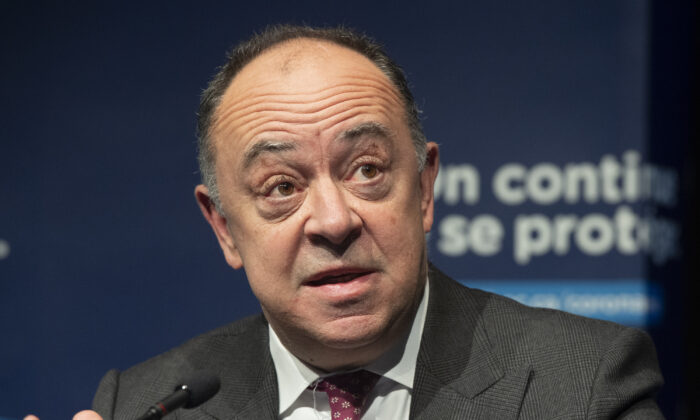 Quebec Health Minister Christian Dubé says it is possible that the government will make COVID-19 vaccination compulsory for Quebecers if necessary.

“I would simply say today that if we have to go there, we’ll go there,” Dubé said during a press conference on Dec. 22. “Right now we’re not there.”

The minister was responding to a question as to why the province doesn’t go tougher on the unvaccinated by making vaccination compulsory, but continues to impose restrictions that affect those who are vaccinated.

Dubé stressed that the government has done much in the course of its COVID-19 measures, to “make a big difference” between the vaccinated and the unvaccinated population.

“Over the past few weeks and months, Quebecers who got vaccinated were able to have a bit of a more normal life, which is not the case for the unvaccinated. The unvaccinated … need a vaccine passport,” he said.

Given that the situation for contracting the coronavirus could worsen, “we won’t hesitate to go further,” he said.

On Dec. 21, Quebec’s public health institute said the more transmissible Omicron variant accounts for more than 80 percent of new infections in the province. But Dubé said the Delta variant still accounts for the majority of those hospitalized with COVID-19 in Quebec.

Premier Francois Legault, who was present at the press conference with Dubé, announced new restrictions, limiting the number of people permitted at indoor private gatherings to six people or two family-bubbles, starting on Dec. 26.

On Dec. 20, Dubé abruptly ordered the closure of bars, gyms, and schools—hours after previously announced capacity restrictions on bars, restaurants, and other businesses came into effect.

“With the increase of cases and hospitalizations, we must put in place new measures,” he said.

Andrew Chen contributed to this report