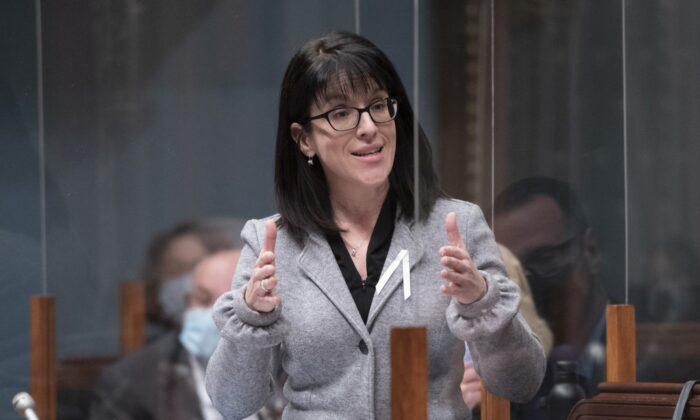 Quebec Treasury Board Chair Sonia LeBel responds to opposition questions over the strike at a youth public daycare centre, during question period at the legislature in Quebec City, Dec. 1, 2021. (The Canadian Press/Jacques Boissinot)
Canada

Quebec’s minister responsible for relations with Canada is defending her decision to erase text messages between herself and her federal counterpart, Intergovernmental Affairs Minister Dominic LeBlanc.

Sonia LeBel, who is also the chair of Quebec’s Treasury Board, told the legislature she didn’t deliberately delete them as a way to make sure no one would see them.

The disappearance of all LeBel’s text messages with LeBlanc over the past four years was first reported by Radio-Canada, which said texting was the pair’s primary method of communication.

Quebec is trying to be granted more powers from Ottawa, particularly over immigration, and opposition parties in the province say the content of text messages between LeBel and LeBlanc likely touched on sensitive issues.

Parti Québécois member Véronique Hivon told the legislature she thinks the messages were deleted because they were embarrassing to the government.

Alexandre Leduc, a Québec solidaire member, told reporters he is astonished LeBel didn’t write official letters to LeBlanc in order to leave a record of their correspondence.

“When you’re negotiating new powers for Quebec and it’s only done by text message, that’s a bit shocking,” he said.