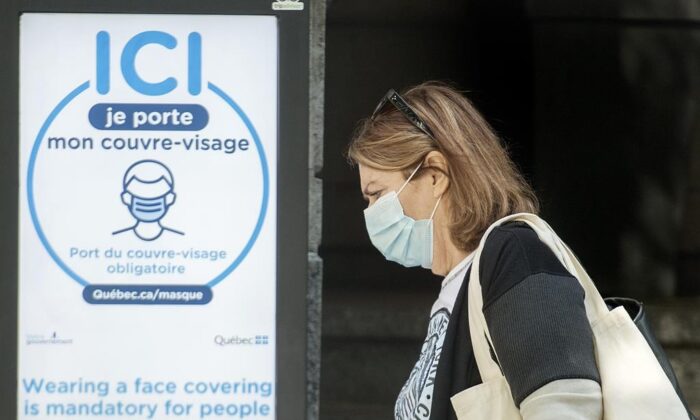 A woman wears a face mask as she walks by a sign advising of the mandatory wearing of masks and face coverings in Montreal, on September 21, 2020, as the COVID-19 pandemic continues in Canada and around the world. (The Canadian Press/Graham Hughes)
Canada

MONTREAL—A Quebec judge has rejected a request from three Quebecers who wanted the province’s rules on face coverings due to the COVID-19 pandemic suspended.

While the request for an emergency stay was rejected, the case will be heard on its merits during a trial at a later date.

“This is not one of those extremely clear and obvious cases that allow a court to intervene before trial,” wrote Pérodeau. “Only a full debate on the merits will shed light on the issues raised and separate the wheat from the chaff.”

Until then, masking measures will remain in effect unless the province changes the rules.

The three plaintiffs named in the action, Francesco Platania, William Thomas and Marie Tranquille, believe COVID-19 isn’t a serious threat to Quebecers and there is no need for the health emergency or face covering measures.

They argued the public health measure should be abolished and declared illegal and unconstitutional. Their arguments include that the requirement to wear a face covering violates their fundamental rights, including the right to life, liberty, security and freedom of expression.

They also argue studies do not demonstrate the effectiveness of face coverings. They noted other provinces have lifted or eased their mask rules. They’ve also asked the court to rule there is no health emergency.

Pérodeau wrote it wasn’t for the courts to decide whether a legislative measure is warranted, but rather if it is legal. There is a presumption that laws and legislative acts are passed in the public interest and seeking to suspend them must demonstrate otherwise.

He also stressed that an emergency suspension must demonstrate urgency and that waiting for the outcome of a trial isn’t possible. The must also show there would be serious and irreparable harm if the measure wasn’t removed.

But the judge wrote the applicants did not demonstrate there was an urgency to their request. The province’s mask rules on public transit and indoor spaces have been around since July 2020, but the challenge was filed 11 months later.

“The situation they are complaining about today has been around for over a year,” he wrote.