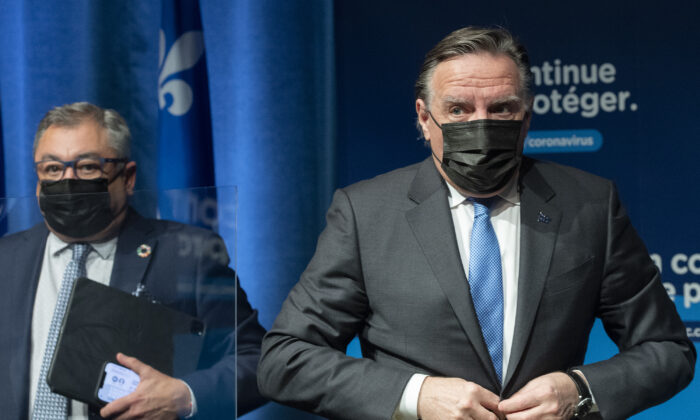 Among the Canadian provinces and territories, Quebec has been the worst violator of the Charter of Rights and Freedoms during the pandemic, says a report released by a civil liberties advocacy group on April 14.

“Between its curfews, border closures, cavalier treatment of religious sensitivities, and outright hostility to unvaccinated Canadians, Quebec was easily the worst offender of freedoms guaranteed by the Charter and the worst place to live in Canada,” says the report, issued by the Justice Centre for Constitutional Freedoms (JCCF).

Titled “Who had the worst bunk in Canada’s locked down barracks?” the report was released as the 40th anniversary of the Canadian Charter of Rights and Freedoms approaches on April 17.

Although Quebec was the worst violator, the report found that none of the provinces respected Canadians’ charter rights amid the pandemic.

“Seeing the severe and widespread violations of Charter freedoms in the past two years, often with apparent public support, is particularly tragic as we mark the Charter’s 40th Anniversary this Easter weekend,” said lawyer and JCCF president John Carpay in a news release.

The report says provincial governments violated Canadians’ Charter rights similarly at the onset of the pandemic, but as time went by, policies diverged and citizens were left experiencing different circumstances.

In measures seen nowhere else, Quebec at one point announced it would tax the unvaccinated and it prevented them from shopping in state-owned liquor and cannabis stores, as well as big-box stores. The tax idea was dropped a few weeks after being announced, with Premier François Legault citing the need to preserve “social peace.”

While the JCCF says Ontario fared better than Quebec and avoided the worst excesses of other provinces, it criticized its “Soviet-style” enforcement of stay-at-home orders with random police stops.

Ontario is also criticized for closing its borders with Quebec and Manitoba, keeping schools closed for the longest period, and prosecuting and fining pastors and congregations that defied restrictions. The JCCF notes however that, unlike Alberta, Ontario didn’t jail anyone.

“Jailed pastors were deprived of their Charter right to life, liberty, and security of the person, for having exercised their Charter freedoms of conscience, religion, expression, association, and peaceful assembly,” says the report.

Outside the freedom of religion issue, Alberta is still considered to have been among the better provinces, along with Saskatchewan, says the JCCF, with centre-right premiers “less committed to lockdowns.”

“All-in-all, it appears that Saskatchewan’s violations of Charter rights and freedoms were the least severe in Canada. If true, this is no cause for Saskatchewan or its people to celebrate, because in every Canadian province the ‘two weeks to flatten the curve’ became two years to flatten our freedoms.”

Regarding the Maritime provinces, the report says residents had more freedom to move in the Atlantic “bubble,” but “severe hardship” was imposed on those needing to work in other provinces.

B.C. gets a hard knock for having violated freedom of religion by closing places of worship for 14 months, and is deemed the second-worst rights abuser after Quebec. Manitoba follows closely behind, says the JCCF, having infringed on religious freedom and mobility rights.