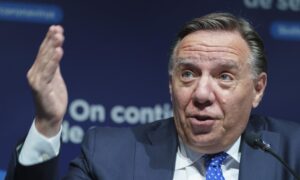 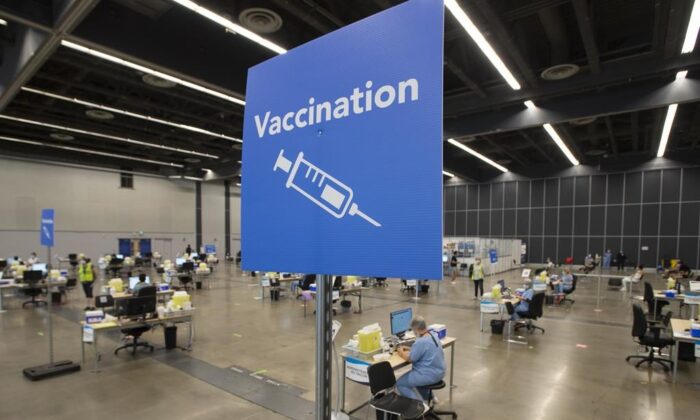 Health-care workers wait to vaccinate people at a COVID-19 clinic, on August 10, 2021 in Montreal. (The Canadian Press/Ryan Remiorz)
Canada

MONTREAL—Quebec is recommending a third dose of COVID-19 vaccine for people who have weak immune systems, who are on dialysis or who have received vaccines not approved in Canada, the Health Department said Monday.

The recommendation is based on advice from the province’s immunization committee and comes amid the rise of the Delta variant, the Health Department said in a news release. The measure targets people who are immunocompromised, such as those undergoing chemotherapy or radiation therapy.

“Such a recommendation is already applied in several countries, notably France and the United States,” the department said. Ontario announced earlier in August it would allow people at “highest risk’’ to receive third vaccine shots in a bid to offer them stronger protection against the highly contagious Delta variant. The Northwest Territories has also said it would offer third doses, to long-term care residents.

Anyone who qualifies for a third dose is able to get one immediately at any walk-in vaccination clinic across Quebec—as long as four weeks have passed since their second dose. The department said the Pfizer-BioNTech or Moderna mRNA vaccines are preferable as third doses compared to the other vaccines approved for use in Canada against COVID-19.

Quebec is not recommending a third dose for long-term care patients.

Residents of long-term care, the department said, don’t need another shot because many of them have recently received a second dose and because of the low levels of circulation of the novel coronavirus within the long-term network.

People who received a COVID-19 vaccine that wasn’t approved for use in Canada are also eligible for a third shot, the department said. “This dose will likely allow a robust immune response to effectively protect against COVID-19.”

Meanwhile, the smartphone application that runs Quebec’s vaccine passport—called VaxiCode—was made available for download on Google Play for Android devices on Monday, Health Minister Christian Dubé told a press conference in St-Jérôme, northwest of Montreal. The application has been available for Apple devices since Aug. 25.

“We asked both companies, Google and Apple, the request at the same time, and it’s up to them to do their own review,” Dubé said. “It’s surprising that it took longer (for) Google, but I would rather that they do the job right and that we have no surprise.”

Quebec’s vaccination passport system starts Wednesday and passports will be required to visit certain non-essential establishments such as bars, gyms, clubs and restaurants.

Last week, the government was forced to defend its vaccine passport system amid news that prominent politicians’ vaccination information had allegedly been stolen. Radio-Canada also reported about a hacker who was able to create a false proof of vaccination that was accepted by the smartphone application that businesses are required to download to verify clients’ vaccination status.

The Health Department had said the vaccine passport was still being tested ahead of its wider launch on Wednesday. “If improvements need to be made, they will be made,” it said Friday.

Quebec reported 386 new cases of COVID-19 on Monday and no more deaths attributed to the novel coronavirus. Health officials said hospitalizations dropped by one, to 125, and 37 people were listed in intensive care, a rise of one.

Dubé said while the numbers may seem encouraging at first glance, authorities will continue to monitor the situation as the school year resumes and summer holidays end. To that end, health authorities ordered students to wear medical-grade masks in class in the more populated regions of the province.

“We put enough measures to say that, the importance was to have our children back in school, but at the same time, let’s go through September and make sure we have things under control,” Dubé said.

The province said it administered another 19,602 vaccine doses on Sunday. About 86.9 percent of Quebecers aged 12 and older have received at least one dose and 80.3 percent are considered adequately vaccinated.

There are 4,405 active reported cases in the province.