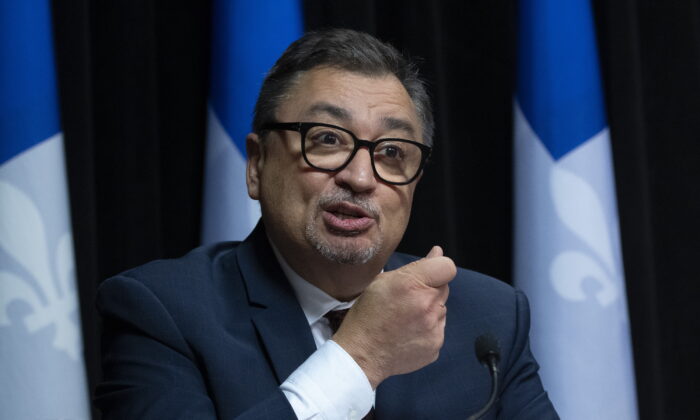 Horacio Arruda, Quebec director of National Public Health responds to reporters during a news conference on the COVID-19 pandemic, at the legislature in Quebec City, on April 16, 2020. (Jacques Boissinot/The Canadian Press)
WORLD

The Quebec government has suggested that reopening schools and daycares could be a way to both kick-start its economy and slow the transmission of COVID-19 in the province.

Quebec’s public health director, Horacio Arruda, told a news conference on April 10 it was “very excessively rare” for children to develop severe symptoms from COVID-19. Allowing them to catch the virus and become immunized would help the wider society, he said.

“Because the more children will be, in my opinion, naturally immunized by the disease, the less they will become active vectors with older people,” Arruda said.

Evidence that children infected with the novel coronavirus rarely develop serious symptoms of the disease has led to talk of exposing students to the virus as a quasi-vaccination strategy and a way of building herd immunity—a type of resistance to the disease’s spread within society.

Premier Francois Legault has floated the idea of reopening schools and daycares before May 4, if COVID-19 hospitalizations stabilize, so adults can return to work without worrying about finding care for their children.

But his comments sparked indignation among teachers’ unions and parents, who talked about logistical nightmares of opening schools too soon and the threat of kids transmitting the virus to their older relatives.

Health experts also question that strategy and say there are larger ethical questions that need to be considered.

Alison Thompson, a professor at University of Toronto’s faculty of pharmacy, said letting children be exposed in schools to COVID-19 is a far cry from a mandatory vaccination program.

“It’s not just a matter of building immunity—they have to get sick first,” she said in a recent interview, calling the proposal a “sickness strategy.”

Erin Strumpf, a professor in the department of epidemiology at McGill University, said Arruda’s strategy follows the same logic as a vaccination program. When people receive a vaccine, they are given a weakened form of the virus, allowing their immune system to build antibodies to kill it.

The more people in a society are vaccinated against a virus, the fewer people are around to transmit it to a vulnerable person.

Strumpf, however, questioned whether Arruda’s strategy would build a sufficient herd immunity in society to protect the most vulnerable. Schools should eventually be opened for other reasons, she explained, but immunizing children is a side benefit.

Reopening schools would allow more people to go back to work and to ensure children from disadvantaged backgrounds have access to proper education, she said: “It would level the playing field.”

But the logistics of allowing daycares as well as primary and secondary schools to open are not obvious.

Josee Scalabrini, president of the federation that represents the majority of Quebec’s teachers, questioned how older and vulnerable teachers can be protected from infected students and how physical distancing can be maintained in crowded classrooms, cafeterias and school buses.

Thompson recognizes that closing schools hurts the economy, but she said opening up the schools too quickly poses many problems. She noted that children are major vectors of pathogens.

“This is not immunity acquired through vaccine,” she said. “This would be naturally acquired immunity, and it’s hard to know how they would acquire that without posing a great risk to the adults that they are in contact with.”

Legault has since tempered some of his initial optimism about opening schools before May 4. He now says the schools will stay closed until public health officials agree to open them and until he has the assurance that there is no risk to children and teachers.

But the premier said Thursday that COVID−19 hospitalizations “are under control” and he is preparing a plan to open up the economy. “We will start with companies. We want to do it in a very gradual way, in an intelligent way,” he said.