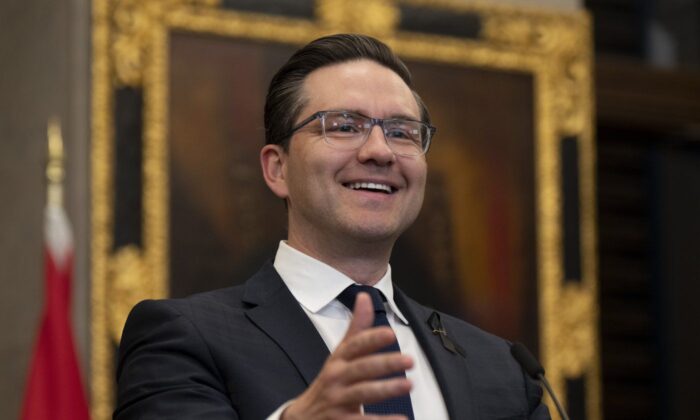 Conservative Leader Pierre Poilievre smiles as a reporter asks him questions during his opening remarks in the Foyer of the House of Commons in Ottawa Sept. 13, 2022. (The Canadian Press/Adrian Wyld)
Canada

Pierre Poilievre’s successful bid to lead the federal Tories bodes well for the Conservative Party of Quebec, which is running in the provincial election on similar messages, analysts say.

Sylvie Trottier said she jumped for joy when she learned that Poilievre on Sept. 10 won the leadership race with a resounding 68 percent on the first ballot.

Trottier, a Quebec Conservative party supporter who was at a recent campaign event in Montreal with party leader Éric Duhaime, said Poilievre won her over when he went to Ottawa last winter to visit the “Freedom Convoy”—the massive protest against COVID-19 restrictions that blockaded the streets surrounding Parliament Hill.

Poilievre “has a lot of ideas that are similar to Duhaime,” said Trottier, 66. “He wants to take care of the people, and he is for the freedom of expression and for individual liberty .… It will create a wave for the Conservatives here.”

Louise Poudrier, the Quebec Conservative candidate in Montreal’s Hochelaga-Maisonneuve riding, said her party—which has no official ties with the Conservative Party of Canada—shares values with Poilievre like freedom of expression and smaller government.

“For people who are part of the Conservative alliance, the fact that Mr. Poilievre was elected leader of the federal Conservative party is a good sign; it’s encouraging for us,” Poudrier said in an interview. “It says to us that we’re not alone in sharing these values.”

Frédéric Boily, a University of Alberta professor who studies Canadian and Quebec politics, said the federal Tory leadership race is “good news for Éric Duhaime in the sense that it bolsters his message, which has similarities with that of Pierre Poilievre.”

Boily said Duhaime and Poilievre benefited from discontent with public health measures introduced during the COVID-19 pandemic. And while almost all of those measures have now been lifted, public resentment lingers, he said.

“It creates the conditions for a certain kind of political message, one that finds the state goes too far, that the state spends too much, that the state is indebting itself,” he said in a recent interview, adding that inflation has contributed to that resentment against the government.

The Russian invasion of Ukraine has also allowed Poilievre and Duhaime to talk about their support for a liquid natural gas plant and pipeline in Quebec’s Saguenay region. The day after Poilievre’s win, Duhaime highlighted their shared support for the natural gas project, describing Poilievre as a longtime friend who volunteered on his failed 2003 provincial election campaign.

“We have a shared understanding of many issues,” Duhaime told reporters, adding that, like many of his party’s supporters, he is also a member of the federal Conservative party.

Poilievre won almost all of Canada’s 338 ridings in the leadership race, including 72 of Quebec’s 78 ridings.

Frédérick Guillaume Dufour, a professor at Université du Québec à Montréal who studies political sociology, said Poilievre’s performance in Quebec was surprising because the province has not traditionally supported politicians like Poilievre who have a caustic style and libertarian leanings.

“I think it demonstrates that there’s a market for ideas that are more populist, more libertarian in Quebec, and right now, it’s Éric Duhaime who occupies that political territory,” Dufour said in a recent interview.

Support for smaller government isn’t entirely foreign to the province. The Action démocratique du Québec — the party that Duhaime stood for in 2003 — advocated for reducing the role of the state in Quebec society. That party merged into the Coalition Avenir Québec in 2012.

Since taking office 2018, the CAQ has moved to the centre-right, and pandemic-related health measures introduced by the CAQ government came with significant state intervention in the economy. The CAQ’s move to the centre has created space for a more fiscally conservative party on the right, Dufour said.

As well, CAQ Leader François Legault sees the state as a tool for his nationalist economic policies, Dufour said, adding that Duhaime is a supporter of more free markets.

Despite Poilievre’s impressive success in Quebec during his leadership campaign, Boily and Dufour say it’s not clear that the new Conservative leader is well known among Quebecers who aren’t federal Tory party members.

And with recent polls placing support for the CAQ above 40 percent—compared to slightly below 20 percent for the provincial Conservatives — Legault’s party appears to remain the choice of conservative Quebecers, Boily said. “The largest part of the Quebecright remains incarnated by the Coalition Avenir Québec.”

Quebecers go to the polls Oct. 3.