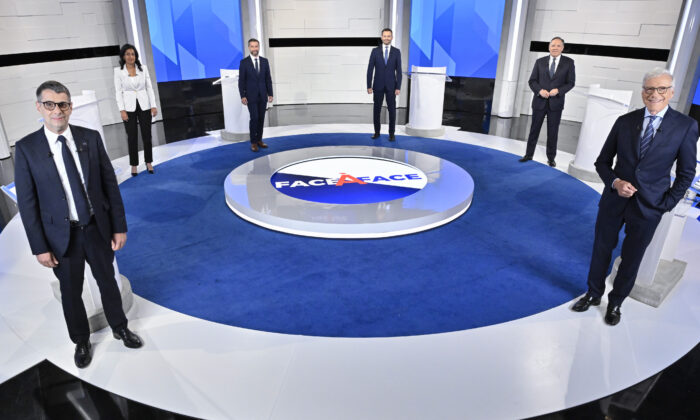 Quebec Premier François Legault defended his management of the pandemic during the first leaders’ debate on Sept. 15, as he faced accusations from Conservative Leader Éric Duhaime that the premier had treated Quebecers “like children.”

“We’re not going to treat people like children like Legault did for two years,” said Duhaime, whose support is boosted by people displeased with the harsh restrictions the province imposed starting in 2020.

“I’m going to talk to Quebec’s population like they’re responsible adults. We’re going to protect the most vulnerable, but we’re going to let people live their lives.”

Legault responded that he took no pleasure in imposing measures.

“I didn’t get into politics to close businesses and impose masks. I did that to save lives,” he said.

The premier rose his voice and accused Duhaime of being “irresponsible” and said he’d been “firing shots in the bottom of the boat” with his pandemic criticism.

Duhaime retorted that what’s irresponsible is not using science to manage the crisis.

“Can you tell us today on what scientific study you relied to impose curfews in Quebec?” he said.

Quebec was the only province to impose curfews and did so twice and over multiple months, with people not being allowed to take solo walks outside at night.

Bruneau showed his colours early on by asking whether Quebec should prioritize protecting businesses or the health of individuals when it comes to pollution.

Legault answered that health comes first but a “balance” must be found.

The premier was challenged by most other party leaders on the issue of climate policies, though he has committed to reach “net zero” carbon emissions by 2050 and has banned oil and gas exploitation in Quebec.

Legault attacked the Parti québécois’ (PQ) plan to increase taxes on hydrocarbons, asking by how much they would raise the price of gasoline.

While most parties argued about who would be greener, Duhaime wondered if anyone was actually thinking about what sacrifices Quebecers would need to make to meet the targets, how many businesses would close and how driving habits would need to change.

Gabriel Nadeau-Dubois, leader of Québec solidaire, said Legault and Duhaime are trying to scare people with taxes and having to make sacrifices, and instead Quebecers should make a societal choice to become one of the greenest places in the world.

Duhaime is the only leader with a pro-oil and gas position and he was targeted for it by Liberal Party Leader Dominique Anglade.

Duhaime told Anglade her promotion of green energy is virtue-signalling since the world still needs and runs on hydrocarbons.

On the issue of violent crime, which has escalated in Montreal with regular shootings, St-Pierre Plamondon said the problem was lack of control at the borders.

His solution is to call for a referendum on Quebec’s separation, so that the province can take control of its borders to prevent gun smuggling from the U.S.

Legault remarked that this was not a “short-term solution” to the issue of crimes committed with firearms.

Nadeau-Dubois said more investments should be made in community services and social workers to free police officers from calls related to mental health.

His claim that a third of calls to the city’s 911 service are related to mental health was fact-checked by La Presse, which said the number was actually 8 percent.

Duhaime took a pro-police stand, calling for not heeding calls to defund the police and to stop “police-bashing.” He said officers need more leeway to be able to do their job properly.

Other topics covered during the debate were the health system, languages, and immigration.

The next debate will take place on Sept. 22. Quebecers will go to the polls on Oct. 3.