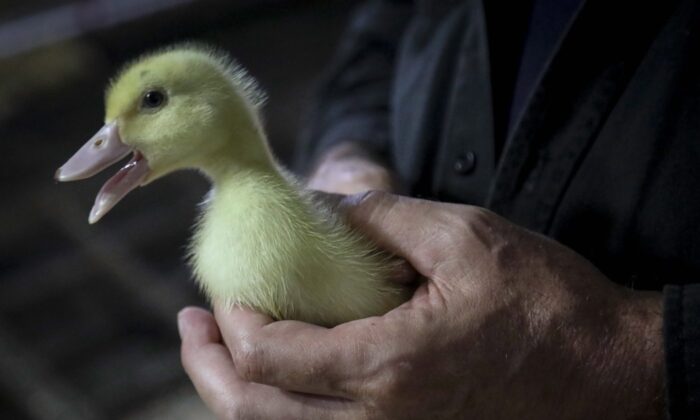 An operations manager for a duck farm, holds a Moulard duckling in Ferndale, N.Y., July 18, 2019. (The Canadian Press/AP-Bebeto Matthews)
Canada

A Quebec duck farm says it has detected a case of avian flu in one of its breeding facilities.

Brome Lake Ducks says in a news release that the highly pathogenic H5N1 strain of avian influenza was confirmed Tuesday on a farm in St-Claude, about 160 kilometres east of Montreal.

The company says it has quarantined the farm as well as another facility in Knowlton, Que., and is working with the Canadian Food Inspection Agency to put biosecurity measures in place.

While most forms of avian flu are mild, H5N1 can cause serious disease and death in birds.

No human cases have been detected in Canada, and the CFIA says avian influenza is not a significant public health concern for healthy people who are not in regular contact with infected birds.