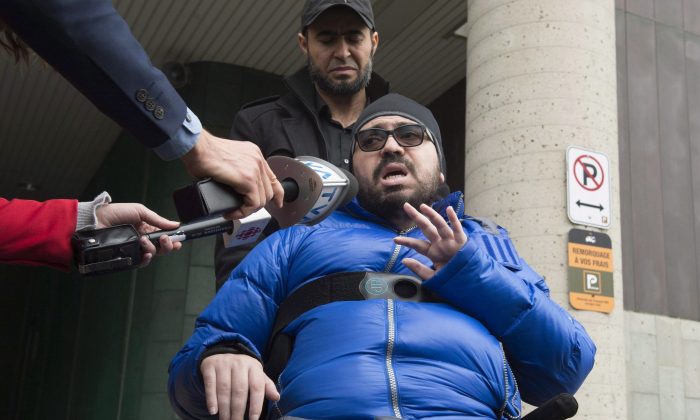 Aymen Derbali reacts to Alexandre Bissonnette’s guilty plea at the hall of justice in Quebec City on March 28, 2018. Derbali was injured during the 2017 mosque shooting and has been paralyzed since. (The Canadian Press/Jacques Boissinot)
Canada

QUEBEC—The man who killed six Muslims in a Quebec City mosque last year as they attended prayer is seeking forgiveness for his acts and says it was “as though I was battling a demon that finished by winning out.”

“Every minute of my existence I bitterly regret what I did, the lives I have destroyed, the pain and suffering I have caused to so many people, without forgetting the members of my own family,” Alexandre Bissonnette said as he read out a letter in court on March 28.

Bissonnette, 28, spoke to the court shortly after a judge accepted his guilty pleas on six charges of first-degree murder and six of attempted murder in connection with the attack.

Many people in the courtroom burst out sobbing and held hands as the judge confirmed the guilty pleas.

Bissonnette originally pleaded not guilty to the 12 charges March 26 but announced that afternoon he was changing his mind and wanted to plead guilty.

Superior Court Justice Francois Huot originally refused to accept the pleas pending a psychiatric assessment of the accused to ensure he fully understood the consequences of his decision.

Huot placed a publication ban on the proceedings but agreed March 28 to accept the guilty pleas.

In reading his letter, Bissonnette said he had been “overcome by fear, by negative thoughts, and a sort of horrible kind of despair” before the shootings.

“It’s though I was battling a demon that finished by winning out…I would like to ask for forgiveness for what I did, but I know my acts are unforgivable.”

The charges against Bissonnette were related to a shooting attack at the Islamic Cultural Centre in January 2017 in which he killed six men.

Psychiatrist Sylvain Faucher met with Bissonnette on March 26 and said he was “fit to stand trial and to plead what he wants to plead.”

“He did not want to be the perpetrator of another collective drama,” said Faucher.

Bissonnette said he wanted to plead guilty in order to “avoid a trial and for the victims to not have to relive this tragedy.”

The counts of attempted murder involved five people who were struck by bullets and a sixth charge encompassed the other people present at the mosque.

Jury selection had been scheduled to start April 3 and the trial is expected to last two months.