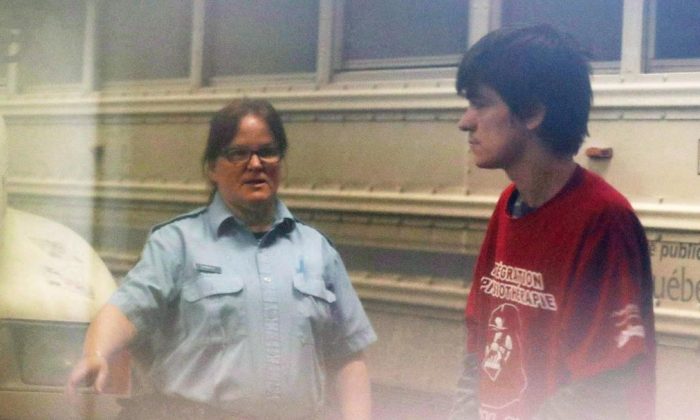 Alexandre Bissonnette (R) will have to serve 40 years in prison before being eligible for parole. (The Canadian Press)
Canada

Quebec City Mosque Killer Gets Life in Prison, No Parole for 40 Years

QUEBEC—The man who shot dead six worshippers in a Quebec City mosque in 2017 has been sentenced to serve 40 years in prison before being eligible for parole.

The judge told Bissonnette, wearing a blue blazer and white shirt, to leave the prisoners’ box and stand in front of him as he read his decision. Huot began by saying the day of the murders “will forever be written in blood in the history of this city, this province, this country.”

Bissonnette, 29, pleaded guilty last March to six counts of first−degree murder and six of attempted murder after he walked into the mosque at the Islamic Cultural Centre during evening prayers on Jan. 29, 2017 and opened fire. The murder victims were Mamadou Tanou Barry, 42; Abdelkrim Hassane, 41; Khaled Belkacemi, 60; Aboubaker Thabti, 44; Azzeddine Soufiane, 57; and Ibrahima Barry, 39.

Several people in the Quebec City courtroom wept as the judge read a detailed account of the shooter’s actions that night. Two women left the room in tears as Huot described how Bissonnette approached Soufiane as he lay on the ground, already wounded, and fired another bullet into his head.

The judge said that in the years leading up to the shooting Bissonnette increasingly drank alcohol and experienced anxiety, depression, and suicidal thoughts.

Huot noted that witnesses at his sentencing hearing testified that he had been severely bullied in school, had a documented history of mental health problems. He also lacked empathy, the judge said, quoting Bissonnette’s statement after the shootings: “I regret not having killed more people.”

First−degree murder carries an automatic sentence of life in prison with no possibility of parole before 25 years. The Crown had recommended that Bissonnette serve six consecutive sentences totalling 150 years, while the defence argued he should be eligible for parole after 25 years.

The Criminal Code was amended in 2011 to allow a judge to impose consecutive sentences in cases of multiple murder, but it was clear as Huot spent nearly six hours reading the 246−page decision that he was wrestling with the constitutionality of the law.

Huot concluded a sentence of 50 years or more would constitute cruel and unusual punishment. In the end he sentenced Bissonnette to concurrent life sentences for five murders, and on the sixth added 15 years to bring the total to 40.

The longest prison sentence in Canada to date is 75 years without parole, which has been given to at least five triple killers since the law was changed to allow consecutive sentences.

All 250 seats in the courtroom were filled, with a section reserved for members of Quebec City’s Muslim community. Bissonnette’s parents were also present.

Among the aggravating factors Huot cited in determining the sentence were the “well−planned and highly premeditated” nature of the crime, the number of victims, the fact they were in a house of worship, and the hatred of Islam that motivated Bissonnette.

On the other hand, the judge said, Bissonnette had no previous criminal record, he pleaded guilty and he expressed remorse. He noted that Bissonnette’s mental health problems contributed to his actions and judged the danger of him reoffending as “moderate” at most.

A decision on sentencing was originally expected in October, but Huot pushed that back, saying he needed more information on some legal questions, including the constitutionality of consecutive life sentences.

Witnesses at the time described the former Universite Laval student entering the Islamic Cultural Centre and calmly opening fire on the crowd gathered for evening prayers.

In addition to the men killed, five others were struck by bullets, including Aymen Derbali, who was shot seven times and was paralyzed from the waist down. The sixth attempted murder charge related to others who were nearby in the mosque.

The crime prompted an outpouring of horror and sympathy that reached across Canada and around the world, prompting a wider conversation on Islamophobia, intolerance, and the need for better understanding between communities.

During sentencing hearings last June, the conversation began to shift to the appropriate way to punish a crime that was, in many ways, unprecedented in Canadian history.

In pleading guilty, Bissonnette expressed shame and remorse for his actions but offered no clear explanation of why he did it. In a statement read in court, he said he was “neither a terrorist nor an Islamophobe,” but rather someone who was “overcome by fear, by negative thoughts, and a sort of horrible kind of despair.”

But in a police interrogation played in court during sentencing, Bissonnette told investigators he wanted to protect his family from terrorists when he committed the killings. He referred to numerous attacks in Europe as well as the 2014 shooting in Ottawa outside Parliament and said he “lost it” after learning Canada was preparing to take in more refugees.

During sentencing, prosecutor Thomas Jacques argued that a 150−year sentence would be proportionate to the “carnage” Bissonnette inflicted on the city’s Muslim community and trauma suffered by the rest of the country. He painted Bissonnette as a calculated killer who was “looking for glory,” and specifically targeted a group of people based on bigotry and hatred.

But Bissonnette’s lawyer, Charles−Olivier Gosselin, portrayed his client as an anxious and fragile man who deeply regrets his actions and is not beyond rehabilitation. He argued a 150−year term would be the equivalent of a death sentence and would run counter to sentencing principles under Canadian law.