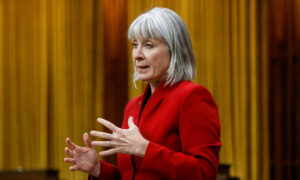 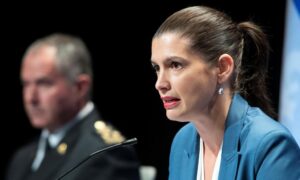 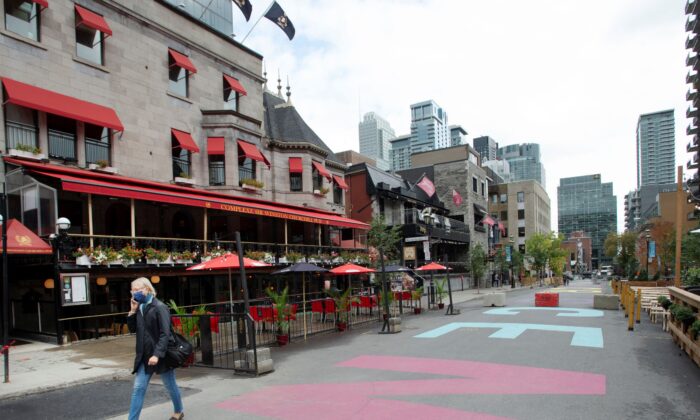 A woman walks past the bars on Crescent street on September 30, 2020 in Montreal. (The Canadian Press/Ryan Remiorz)
Canada

Quebec reported 16 more deaths Thursday as it began the first day of new restrictions meant to flatten a spike in COVID-19 infections, while Ontario was dealing with a backlog of more than 82,000 tests.

Partial lockdowns in the greater Montreal area, Quebec City, and the Chaudiere-Appalaches region south of the provincial capital are to last at least 28 days.

Bars, casinos, concert halls, cinemas, museums, and libraries are to be shuttered and restaurants will be limited to takeout.

Private gatherings are prohibited and people cannot have any visitors from another address at their homes, with caregivers or maintenance workers among the few exceptions.

Outdoor gatherings are forbidden, masks are mandatory for demonstrations, and police have the power to hand out hefty fines to those who flout the rules.

The new deaths brought Quebec’s total to 5,850. It had 933 new cases and the number of people in hospital rose by 13 to 275. Forty-six people were in intensive care.

In Ontario, there were 538 new COVID-19 cases reported Thursday and three new deaths. There were 162 people in hospital, including 36 in intensive care.

Nearly 40,000 tests were completed since Ontario’s last daily report, but there were still more than 82,000 samples waiting to be processed.

In Alberta, a technical glitch prevented 5,000 people who tested negative for the novel coronavirus from getting their results by phone autodialer or text. Those affected made up less than 3 percent of the 224,000 tests completed between Sept. 3 and 29.

Anyone with a positive result in that time frame was informed by direct phone call.

Alberta Health Services said Thursday the problem had been corrected and delayed results were being delivered.

The Health Quality Council of Alberta, a provincial agency, said a survey done between May 25 and June 29 found 30 percent of more than 11,000 respondents said they delayed seeking health care due to the pandemic. Of those, more than one-fifth said doing so affected their health “greatly” or “quite a bit.”

Nearly three-quarters of respondents reported experiencing stress, anxiety or depression with which they found it difficult to cope.

Also on Thursday, Manitoba went live with the national COVID Alert app. Quebec is to follow in the next few days. British Columbia, Alberta, Nova Scotia, and Prince Edward Island are in the final stages of discussions.

Ottawa is in talks with all remaining provinces that have not yet adopted the app.