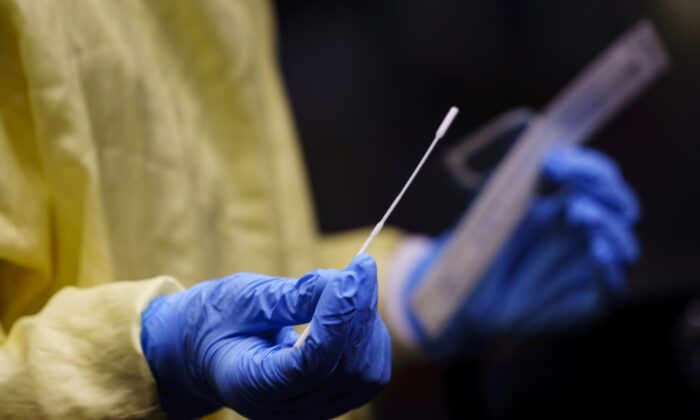 A nurse gets a swab ready to perform a test on a patient at a drive-in COVID-19 clinic in Montreal, on Oct. 21, 2020. (The Canadian Press/Paul Chiasson)
Canada

MONTREAL—Quebec urged the federal government Tuesday to increase surveillance of returning travellers as the province confirmed its first case of a more contagious COVID-19 variant that was first identified in the United Kingdom.

His most urgent request, he said, is for the federal government to increase in-person visits to make sure travellers who return home are following the mandatory two-week isolation period.

Dube spoke hours after Quebec became the fourth Canadian province to confirm a case of a new and more contagious strain of COVID-19.

He said the person who tested positive is related to someone who returned from the U.K. on Dec. 11. The Health Department said the traveller and three members of their family all tested positive, but only one of them has been confirmed to be carrying what’s know as the “S” variant.

Dube said the traveller wasn’t believed to have had “prolonged” contact with anyone else, and that the members of the family were isolating. He said the news doesn’t change current protocols around self-isolation.

The variant was first identified in the U.K. but has since spread to several other countries and has been identified in British Columbia, Alberta and Ontario. Canada’s public health agency says while early data suggests the new variant may be more transmissible, there is no evidence the variant causes more severe symptoms of COVID-19 or impacts vaccine effectiveness.

Meanwhile, Quebec moved closer to the 200,000-case mark on Tuesday with the addition of another 2,381 cases of COVID-19. Sixty-four more deaths were reported, including 17 that occurred in the last 24 hours. Dube said the situation was “critical” in some regions, including Montreal, which reported close to 1,000 cases in the past 24 hours.

Dube said the vaccination operation was going “smoothly,” but that Quebec was rapidly running out of doses. The province has received 55,000 doses of the Pfizer vaccine thus far, but he said the manufacturer requires half that amount be held back in order to give booster shots 21 days after the first one is administered.

Dube said the province, like other jurisdictions, was evaluating the possibility of using all the doses as it receives them, without holding any back, as a way of protecting as many people as possible and “forcing the hand” of Pfizer to maintain supply. He said, however, such a decision would not be made without the manufacturer’s agreement.

Horacio Arruda, the province’s director of public health, said health experts believe the vaccine will remain as effective if the booster shot is delivered beyond the standard 21-day period, but said he wants to be certain before making changes to the vaccination schedule.