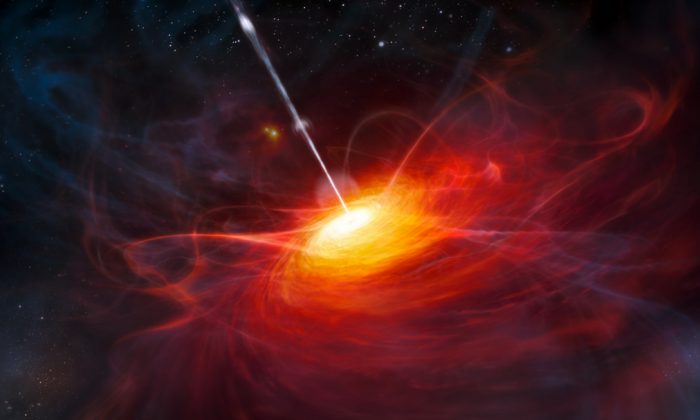 A “spectacular” outburst from a distant quasar in April of this year gave astronomers the opportunity to measure the density of the optical “fog” that lies between the quasar and Earth—and to deduce the surprising separation of the high-energy emission from the black hole that drives it.

“On April 20, 2015, we got word from the Fermi satellite and the MAGIC telescope observatory that they had spotted a very active source—one that was getting very bright in gamma rays,” says Manel Errando, a research scientist in physics at Washington University in St. Louis. “At the time, I was chair of the committee at VERITAS that decides which sources we’ll observe. We decided to give it a go.”

VERITAS is a telescope array in southern Arizona that is sensitive to very high-energy gamma rays, those with billions of times more energy than the photons to which our eyes are sensitive. Over the next 10 days, it detected high-energy gamma rays from the quasar, known as PKS 1441+25, including some with energies of about 200 GeV.

“We knew that this source emitted low-energy gamma rays, but this time we detected high-energy ones that usually don’t make it to Earth,” Errando says.

“This is the first puzzle: How is it possible that gamma rays of such high energies made the trip all the way from this very distant quasar to Earth without getting lost in the fog of visible photons in between? The second puzzle was that the high-energy gamma rays were produced far from the black hole that powers them, not close to it, as you would expect.”

“Everyone who had a telescope was looking at PKS 1441+25, which was active across all wavelengths,” says Errando, corresponding author of a paper in Astrophysical Journal Letters.

“We were surprised to detect high-energy gamma rays,” Errando says, “because they don’t usually make it through. It’s like turning on your high-beams in a fog.”

Very energetic gamma rays are easily knocked off by visible light, the light from galaxies and stars that fills intergalactic space. Lower-energy gamma rays mainly interact with ultraviolet light and X-rays. There are lots of sources of visible photons—stars and galaxies—but not as many X-ray sources that would bother the lower-energy gamma rays.

The arrival of high-energy gamma rays therefore allowed the astronomers to set a limit on the density of the fog of photons between the quasar and Earth, the photons that should make it difficult for those gamma rays to propagate.

Because it takes light time to travel, astronomy can be a time machine; the farther away the source, the farther back in time the light was emitted. The light from PKS 1441+25 traveled at least 7.6 billion years to reach Earth, or more than half of the age of the universe.

The measurement VERITAS made validated theoretical models for the number and brightness of stars and galaxies in the universe going back in time 7.6 billion years, Errando says, leaving little room for the discovery of other sources that might be emitting optical light.

For example, many people have been looking for what are called Population III stars. Stars are sometimes described by their metal content, which provides a rough measure of their age. Population I stars condensed from gas seeded with heavy elements formed in previous giant stars. Population II stars formed in regions where there were no heavy-element producing predecessors. Population III stars, if they exist, would be stars that formed even earlier, before galaxies formed.

“The fact that the gamma rays get through means that there is not as much fog as you go farther out, and therefore any unconventional population of early galaxies and stars must not be very numerous,” Errando says.

While VERITAS was looking at the gamma ray emission from PKS 1441+25, the Owens Valley Radio Observatory in Bishop, California, was looking at its radio emission.

Also, the radio emission was changing quite a bit, getting brighter and weaker. All quasars emit at radio frequencies, but usually this emission is stable; the radio flux doesn’t change that much.

What’s more, fluctuations in the gamma-ray emission were synchronized with those in the radio emission. “The most likely explanation for the synchronization,” he says, “is that the radio waves and gamma rays were emitted from the same region of the jet.

This One-Pound Gamma-Ray Sensor Can Find Gold on Asteroids

“That surprised me. The central black hole is the most energetic element in this whole system, so you would expect these very high-energy gamma rays to be produced close to it. Instead, they were emitted roughly four light years away, roughly the distance from Earth to the nearest star.

“If the black hole were as big as a university classroom, the gamma rays would be emitted in Alaska.

One mechanism that could explain this is shocks, Errando says. “When the wind of particles streams out of the black hole, it slams into an environment that’s not moving, creating shock waves,” Errando said. “It’s probably these shock waves that are producing gamma rays so far away from the black hole.

“This tells us that the shocks in the particle winds are probably much more efficient than we had realized, because they are able to transport energy from the black hole great distances and still accelerate particles to these insane energies.

“PKS 1441+25 is the first quasar in which we’ve seen this separation If it is common, it might mean that quasars as a group make a bigger contribution to the total high-energy radiation power in the universe, because they’re producing gamma rays and energetic particles that are able to escape to space.

“In any case, it’s just spectacular that something as small as a black hole can drive energy transport to such great distances.”