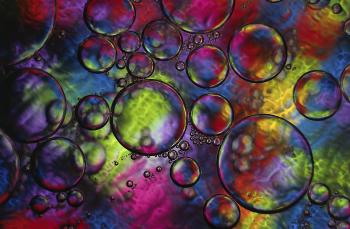 Some researchers posit that our universe, like a bubble in a sea of bubbles, could at times be connected to other universes, with each individual also connected to a parallel counterpart. (Photos.com)
Beyond Science

Every minute, billions of particles traveling from the sun pass through our bodies, and their trajectory continues—passing right through the planet as if solid matter didn’t exist.

These are, of course, neutrinos, the particles “without mass.” While recent studies have revealed that these neutrally charged particles actually do possess mass, neutrinos remain the most difficult subatomic particles for modern physicists to study, mainly because they make so little of an impact on atomic structures as they wander about. Due to their tiny size they pass through everything, as though they were ghosts.

What’s more, thanks to a few neutrinos that have actually been able to be observed through special detectors set up in a lab at the South Pole, scientists may have confirmed the existence of other dimensions.

So why build a lab at the South Pole?  In their hunt for other dimensions, scientists specifically require a galactic traveling particle known as a high-energy neutrino. While we still don’t have the technological means to produce such particles in an accelerator, nature can generate the desired effect. The South Pole simply offers a setting on Earth with the least amount of interference from other factors.

But even with a polar facility, these special neutrinos can be hard to find. The AMANDA (Antarctic Muon And Neutrino Detector Array) laboratory has detected only a handful of high-energy neutrinos thus far, but a new detection device still under construction—called IceCube—may increase chances of observing these elusive particles.

With these special sensors buried several hundred feet below the polar ice cap, scientists can detect flashes of blue light when these high-energy neutrinos (particles that bombard us by the trillions every second) collide with an atomic nucleus in the layer of ice that make up the walls of the installation.
Visualizing Different Dimensions

Analyzing these findings, AMANDA scientists have concluded that it is very probable that Superstring Theory (ST) may in fact be an accurate portrayal of reality—as far as it suggests that apart from the three spatial dimensions in which we can perceive, the universe has an even greater dimensional complexity. When these high-energy neutrinos (particles able to traverse the deepest regions of space) collide with protons here on Earth, scientists believe that they may have a window into these other dimensions.

So if there really are more than three physical dimensions, why can’t we see them? The answer is simple to say, yet difficult to truly comprehend: The extra dimensions ST refers to are quite tiny—smaller than the diameter of an atom.

According to ST, the universe consists of 9, 10, 11, or even more dimensions. While we may not be able to easily visualize higher dimensions (possessing as we do a mind that has become well adapted to life in a three-dimensional world), the mathematical concepts of theoretical physics open the universe up to an even greater scope of perception. AMANDA and IceCube may, however, provide real evidence of the multiplicity of dimensions described by ST.

As researchers try to prove ST, other scientists are imagining other theories to explain the universe. One such view is being investigated by NASA. Using computerized models, they have taken to the task of creating thousands of possible parallel universes, as though they were bubbles.

According to researchers, these spheres (called universes) could either possess a set of physical laws similar to those of our universe or could well have adapted themselves to a completely different set.

Such a theory provokes the spooky sci-fi possibility that each person has many “versions” of themselves in each of these respective universes. It is further thought that these universes, while unconnected at certain periods, might also connect at other times—facilitating possible travel between them.

Whatever the case, without proof or even a means of experimentation, scientists still can’t be sure which of these theories represent reality and which one accurately describes our world.  Meanwhile, the conceptual ideas aiming to describe the universe with the data available begin to approach the mystical.

According to cosmologist Max Tegmark, there are currently four theories of possible multi-universes (or multiverses) proposed:

Level I or open multiverse: This theory postulates that the number of possible universes is as many as bubbles of a certain diameter that can exist. Since the volume of each bubble is finite, it leads to the conclusion that each certain universe is repeated in all its possible variants.

Level II or bubbles: These universes are separated by an empty space. This empty space would expand faster than it would be possible to travel through. They would also have, in addition, different basic conditions as well as different fundamental physical constants.

Level III or the interpretation of many worlds: In these universes, whenever a quantum function collapses, the universe unfolds itself into as many “versions” as necessary to realize all possible results.

Level IV or the ultimate ensemble: Universes with other mathematical structures leading to fundamental differences in physical laws.

For more information go to: