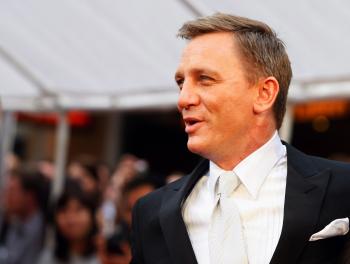 Actor Daniel Craig arrives for the Australian premiere of 'Quantum of Solace' at the Hoyts Cinema in Sydney. (Gaye Gerard/Getty Images)
Entertainment

This concludes possibly one of the best endings in cinematic history (next to that of the 1969 The Italian Job which redefined the phrase “cliffhanger”).The perfect stage is ultimately set for Quantum, the latest Bond adventure. His accomplice and potential lover slash traitor has been brutally murdered by a shadowy organization, and Bond stands upon the threshold of uncovering the truth.

However if fans were expecting a similar rendition to Casino Royale with a relatively simple plot, fast paced action and humor, they are sadly mistaken. In comparison to Royale, Quantum lacks consistency as the plot muddles its way through with  Bond, rampaging all over the world in an attempt to uncover the person or ‘persons’ responsible for Vesper’s (Eva Green) death and, at the same time, uncovering attempted coups, eco-terrorism and unexplained mining exploits. Despite Bond’s dedicated rampage for truth and blood the suave secret agent still remains unsure as to whether the very woman he is attempting to avenge betrayed him, which makes the plot even more confusing.

The much anticipated sequel opens with an intense car chase through the streets of Sicily resulting in surprisingly very little carnage with the exception of the loss of a car door. When all the dust has settled Bond opens the trunk to reveal a restrained Mr. White and Bond quips “It’s time to get out.” Sadly this is surprisingly about the only trademark Bond quip throughout the entire film.

In comparison to its predecessor Casino Royale, Quantum of Solace  reverts back to the traditional style of Bond movies with massive explosions and over the top fight sequences. Even the opening credits are a reflection of previous incarnations, featuring half illuminated naked women and a flying bullet. Bond’s womanizing ways also make a return as the British agent unnecessarily seduces the ‘none too bright’ Agent Fields, resulting in her untimely demise by oil coating, a possible homage to Goldfinger (1964)

In spite of the denials made by director Marc Forster regarding similarities between the hugely successful Bourne series directed by Paul Greengrass and his latest Bond adventure, there are unmistakable parallels. Throughout the course of the film Bond runs along roof tops, jumps through windows and even gives chase on a motor bike, all of which bear suspicious similarity to many of the action scenes in the final Bourne chapter.

The Bourne series is not the only thing the director rips off. The subtitles for each global location bear striking similarity to the style adopted by Tim Kring, creator of the cult phenomenon Heroes. Much like Quantum itself these subtitles also lack consistency, frequently changing color and font like a malfunctioning word processor.

The other element that alludes audiences as much as the plot is the mysterious Mr. White whom after escaping early on in the film only appears occasionally before vanishing out of all existence. Even the conclusion of the film, despite the expected demise of most of the villains and vague references to something called “Quantum”, offers no resolution as the audience is left not entirely sure who exactly was responsible for the death of Vesper Lynd. The only solace audiences have is that at least they can enjoy the first film without feeling connected to this Quantum disaster.