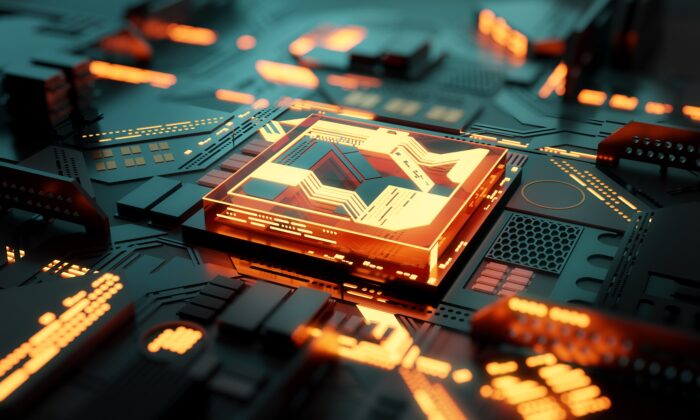 Quantum Computing as Important as the Atomic Bomb: Expert

Chinese tech giant Baidu is developing its own quantum computer to compete with the United States in the race toward next-generation information processing. The computer does not outperform rivals currently being developed in America but, according to one expert, signals dire competition over the future of data security.

Arthur Herman, a senior fellow at the conservative think tank Hudson Institute, said that Baidu’s recently announced quantum effort fell short of similar efforts being made by companies like Google and IBM.

“This quantum computer that they’re touting has only 10 qubits, and that’s a pretty small number,” Herman said during an Aug. 29 interview on the “China in Focus” program on NTD, a sister media outlet of The Epoch Times.

“Google’s Sycamore quantum computer has 60 Plus qubits. IBM’s is upwards of 70 qubits.”

A quantum bit, or qubit, is a basic unit of quantum information used by quantum computers. Whereas traditional processors use regular bits, which can be turned on or off to create binary code, qubits can be turned on, off, or both on and off simultaneously in a phenomenon known as superposition.

The existence of this third state will allow quantum processors, theoretically, to achieve much quicker processing speeds than their traditional counterparts.

Governments and companies alike are thus rushing to develop quantum computing in order to be the first to achieve data dominance, as such quick processing speeds could allow for the mass decryption of current security measures. However, the real-world applications of the technology are still only very limited.

Herman, who directs the Hudson Institute’s Quantum Alliance Initiative, said that that limited usefulness now belied the world-changing implications of quantum technology. Moreover, he said, the race toward revolutionary quantum capabilities could hit a breakthrough at any time.

“There’s too many indications that with one or two major breakthroughs, at the conceptual level [or] at an engineering level, that suddenly the process will take [a] much shorter time than even the experts have wanted to predict,” Herman said.

“It will be easy for such a device to decrypt all of the existing public encryption systems. In other words, such a device will be able to wipe out any kind of encryption that currently exists today in order to extract whatever kind of data, classified or otherwise, that it wants to get its access to.”

That possible capability is what makes the technology so prized among the nations of the world, and why the United States and China are competing to deploy it before the other.

“Right now, it’s nothing that we really have to worry about,” Herman said. “It’s an indication that the United States … [is] still very much ahead in the race towards developing a large-scale quantum computer.”

“The fact that we have a lead doesn’t necessarily mean we’re going to win,” Herman added. “It’s like the hare and the tortoise. We’re like the hare, we’ve sprinted ahead … but the Chinese are moving ahead toward us, slowly but surely.”

‘As Important as the Manhattan Project’

While Baidu’s recently announced quantum computer is only 10 qubits, the company claims to have also developed a 36 qubit chip. IBM, meanwhile, has said that it hopes to develop a 4,000-cubit quantum computer by 2025.

For his part, Herman said that the 10,000 or more qubits needed for codebreaking efforts to really begin would likely not happen until sometime in the 2030s.

“People are beginning to realize that what seemed to be a threat far off [on] the horizon is actually a lot closer than we had thought,” Herman said.

“What you’re talking about is the ultimate weapon in cyber warfare that could come as a result of the race that we’re engaged in with China towards a quantum computer.”

Herman said that the unstable timeline to develop next-generation quantum technologies was one problem. Another, he said, was developing adequate security protocols for when that technology arrives. Predicting what quantum cyberwarfare will look like is difficult, he said.

“The reason I created the Quantum Alliance Initiative in the first place is that we can’t afford to gamble,” Herman said.

“The fact is that [China] can use this [through threats], as well as at a deployment level, in ways that are really difficult to understand and gauge at this point. What would cyber warfare waged on a quantum scale really look like?”

Thus, while Herman believes that the United States should not be concerned about Baidu’s latest quantum endeavor, he did believe the world ought to be concerned about the steps being taken toward quantum technology as a whole. Like atomic weapons in World War II, he said, it would only take the development of one or two such devices to forever change the nature of information security.

“This is potentially as important as the Manhattan Project to create the atomic bomb,” Herman said.

“[It’s] potentially as important as the race to create the hydrogen bomb because of the enormous catastrophic effect [that would occur] if the Chinese were to have a codebreaking quantum computer before we have it or before we’re really ready to face it.”