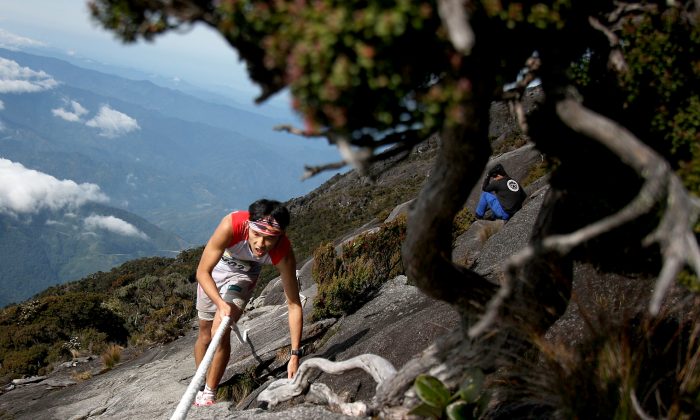 A participant runs through the gruelling course during the 2013 Mount Kinabalu Climbathon on October 19, 2013 in Kundasang, Sabah, Malaysia. The Climbathon, which first started in 1987, has now gained the International Skyrunning Federation accredititation that draws top international runners from various countries who race to gather points with the aim of becoming the series world champion. (Rahman Roslan/Getty Images)
Asia & Pacific

KUALA LUMPUR, Malaysia— A Malaysian official says a magnitude-5.9 earthquake has injured 11 climbers on Southeast Asia’s highest peak and about 130 people are stranded.

Sabah Parks director Jamili Nais says two climbers who were injured on Mount Kinabalu have been brought down. Nine more people are believed to be injured among the 137 stranded on the mountain.

Their climbing route is apparently blocked or made dangerous by rocks and boulders loosened by the quake and small aftershocks.

The park director said helicopters can’t land due to bad weather and the high altitude, but park rangers and mountain guides are trying to help down the climbers.