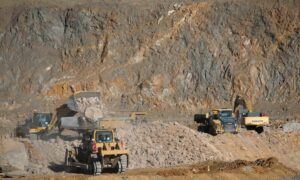 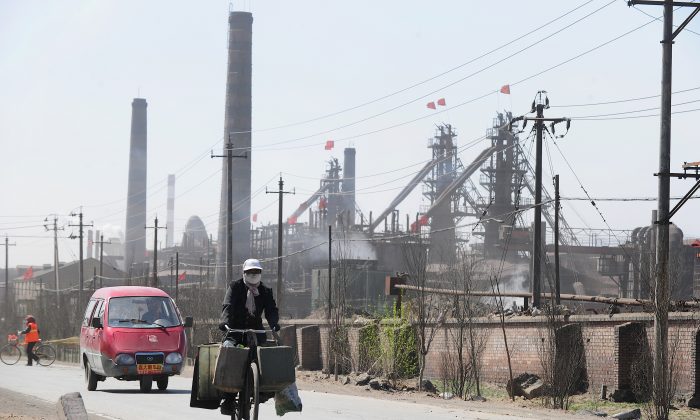 In a file photo taken on April 21, 2011, a cyclist wears a protective face mask while riding along a dusty road where dozens of factories processing rare earths, iron and coal operate on the outskirts of Baotou city in Inner Monglia, northwest China. (Frederic J. Brown/AFP/Getty Images)
Asia & Pacific

S. Chandrashekar, a global authority on critical technologies and a former scientist at the Indian Space and Research Organization, told The Epoch Times in an exclusive interview that critical technologies have penetrated all aspects of living. Many things, ranging from “electric vehicles,” to “green energy” to the “big economy,” have a strategic significance that needs to be minutely understood if Quad countries decide to coordinate a critical technology supply chain.

“We need to understand how we can use this transition period, where all the countries are aligned in common with the purpose to contain or deal with China, which has control [over these supply chains],” he said, adding that it’s an opportunity to actually strategize for an alternate industrial ecosystem for rare earths (RE). “So there are some finer nuances that one has to kind of watch.”

These critical technologies depend upon the critical RE elements, the processing of which is dominated by China. Even the manufacture of key intermediate products essential to these high-tech growth industries is also controlled by China.

The critical nature of these technologies and their growing indispensability to the global economy has created a vulnerability for advanced nations, and on Sept. 30, 2020, President Donald Trump declared the U.S. dependence on China for RE metals a national emergency.

The Biden administration has also decided to review critical supply chains to reduce dependence on China. President Joe Biden signed an executive order on Feb. 24 with the goal of establishing “resilient, diverse, and secure supply chains to ensure our economic prosperity and national security.”

The significance of China’s control of critical technology supply chains can be further gauged from the economic indispensability of critical technologies such as artificial intelligence that is expected to boost GDP for local economies by 26 percent by 2030, potentially contributing $15.7 trillion to the global economy, according to a report by PWC, a global professional service network.

China has established global dominance in the RE industry and controls the entire global supply chain, from mining to the production of important intermediate products that are critical inputs for high growth industries, Chandrashekar wrote in a paper co-authored by Lalitha Sundaresan and Nabeel Mancheri and published by India’s National Institute of Advanced Studies (NIAS), where he’s also a professor.

China’s focus on achieving global dominance in the RE industry was approved under its Program 863, included under its strategic nuclear program, according to the NIAS paper. The objectives include “[gaining] a foothold in the world arena” and “[striving] to achieve breakthroughs in key technical fields that concern the national economic lifeline and national security.”

The areas of emphasis identified by Program 863 include biotechnology, space technology, information technology, laser technology, automation, and energy. Program 863 was approved by paramount leader Deng Xiaoping in 1986, and received a boost in 1997 through program 973.

“Improve the developments and applications of Rare Earths and change resource advantage to economic superiority,” Chinese leader Jiang Zemin said that year, according to the NIAS paper.

Two years before that, China could acquire, with conditions, the General Motors subsidiary Magnequench, with the aim of catching up with the permanent magnet technology.

All assets of Magnequench were moved to China in 2002 after curbs were lifted by the United States. That gave China a global dominance over the powerful magnet industry—important for the manufacture of wind turbines, electric vehicles, satellites, rockets, and robots.

“After they bought Magnaquench, they also merged operations with a Canadian company Neo Materials—that is involved with RE. Neo Materials has tie-ups with U.S. mining and processing companies to buy basic RE material—they are sent to China for separation,” Chandrashekar said.

Since then, the Chinese have bought major stakes in various RE mining companies including Australia’s Lynas, according to the NIAS paper. Even less than 50 percent stakes provide China access to information and influence, Chandrashekar said.

Today, China is focused on building a domestic RE industrial ecosystem with a focus on mining and processing, manufacturing and application, and research and development after having already acquired global dominance.

Chandrashekar said the United States initially played a pioneering role in many “breakthrough discoveries” in RE materials, but allowed its once-dominant position to deteriorate.

“It’s now dependent on Chinese largesse to make sure enough RE materials and intermediates are available for [U.S.] use. The U.S. today has no industrial capacity in RE, allowing global market dynamics to move all of them to China,” the NIAS paper’s authors said.

After Biden signed the executive order for secure supply chains, the White House said that the secretary of defense, who is also the national defense stockpile manager, will submit a report identifying risks in supply chains for critical materials—which include RE minerals—and make policy recommendations to address those risks.

The RE supply chain is complex because each final product—such as a car or a cellphone—contains thousands of intermediate products or assemblies, each of which may require a supply chain with a high degree of strategic input and coordination.

“A windshield wiper in a car may require a small motor which requires a magnet, which in order to reduce the size and power requirements may need a RE magnet. The same car may need a display unit that is like a TV that uses a phosphor coating that provides the lighting for the display. The car may be a hybrid or an all-electric that requires a motor that converts battery power to mechanical power—that may involve a different kind of RE magnet,” Chandrashekar said.

“The car may have a battery that is made out of a nickel-hydrogen cell that may require an electrode to which lanthanum [one of the 17 RE materials] is added. The catalytic converter that is attached to the exhaust of gasoline-powered car—uses metals like platinum, palladium, and rhodium. These are not RE but have some RE materials added to them to reduce cost and improve the ability to deal with pollutants like carbon dioxide, nitrous oxide, and so on.

“A music system in the car may need speakers, which also need RE magnets. The list can go on to include many other items that need RE elements.

“The use of the RE can be visualized as a complex network of connections between the RE elements, parts, sub-assemblies, and products—this network can be represented by what is called an input-output matrix—the network that we counted in our report was one that had 92 nodes, all of which are connected,” he said, noting how damaging a supply chain disruption can be to a complex matrix.

“Since China has a stranglehold on raw materials as well as many intermediates like magnets, phosphors, catalytic converters, batteries, and many others—they can if they chose seriously endanger the production chains of the advanced countries. A disruption in the supply will affect many interconnected and inter-linked products and industries.”

Over a decade ago, China suspended the supply of RE to Japan for two months over a fishing trawler dispute and recently passed a law that requires case-by-case scrutiny of exports.

“Since the Chinese embargo in 2010, Japan has been worried, long before the U.S., about its vulnerabilities in RE. I am pretty sure they have a mechanism in place to reduce vulnerabilities,” Chandrashekar said about the strategic nature of RE and why those materials are included in the QUAD’s agenda.

He said that while some countries such as India could be in a better position to supply RE, others like the United States and Japan would have the required mineral processing and intermediate product technologies that define the supply chain of critical technologies.

As a result of the 2010 embargo, Japan is better prepared to respond to similar situations. While Australia has good trade relations with China, particularly in mining, this relationship has recently turned “acrimonious.”

Chandrashekar said the United States under Trump took strong action to be prepared for threats to the country’s high-tech economy.

“They have in place a strong, fairly integrated program for alternate supplies in case of domestic and international tie-ups—the program also calls for reducing RE content and using alternative materials and designs to bypass RE materials completely,” he said.

“The U.S. has scaled up and is well on its way to reducing the impact of any Chinese threats. Xi visited an RE center to send a threat to Trump, as per the news media.”

India, which has been mostly a raw material supplier, was also forced to develop domestic technology for magnets when faced with embargos, and the country has used these in its Polar Satellite Launch Vehicle.

“More recently, a facility to produce magnets for critical security needs is being set up,” Chandrashekar said

Chandrashekar says each of the four Quad nations has RE strategies with varying degrees of scale, and it could “still be useful to explore cooperation and coordination.”

He said for coordinating a sustainable critical technology supply chain, it’s important for each of the nations to first identify their technology needs, see who can provide the raw materials, who can provide intermediate technologies, and who can manufacture. In this process, Chandrashekar said it’s important for each country to build assurances and long-term trust because coordination, joint research, and innovation will take time.