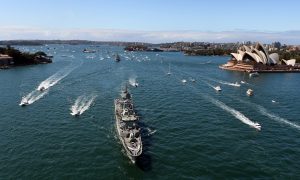 The Quad alliance made up of foreign ministers from Australia, the United States, India, and Japan will convene a meeting in Japan on Oct. 5-7, a move that has drawn the displeasure of the Chinese Communist Party.

They will discuss support for regional responses to the pandemic along with vaccines for the CCP (Chinese Communist Party) virus, supply chains, and quality infrastructure investment. The CCP virus is commonly known as novel coronavirus.

“The Quad meeting comes at an important time in the Indo-Pacific, when our shared interests are under unprecedented pressure, including as the region responds to COVID-19,” Payne said in a statement on Oct. 3.

“We are committed to working together, and with all countries in the region, to chart a road to recovery in a way that helps all countries reinforce their sovereignty and resilience.”

Toshimitsu Motegi, Japan’s foreign minister, anticipates the meeting will receive a “high degree of attention” as it is the first to be held in Japan since the CCP virus pandemic.

“I believe it is truly timely to have the foreign ministers of the four countries meeting in Tokyo for an in-person exchange of views. We have similar views about responding to various issues that have come about due to the outbreak and spread of the novel coronavirus as well as regional situations,” Motegi said at a press conference on Sept. 29.

Motegi said he will seek to further deepen cooperation between the participating countries.

“The “Free and Open Indo-Pacific” vision is becoming increasingly important for the post-novel coronavirus world,” he said. He also aims to have bilateral meetings with each country’s foreign ministers.

U.S. Secretary of State Mike Pompeo said he was looking forward to visiting Tokyo for the meetings.

“Anticipating productive meetings with my counterparts, as well as the Quad Foreign Ministers meeting with Australia, India, and Japan,” he wrote on Twitter on Sept. 29.

Pompeo has been on a diplomatic tour through parts of Europe which included talking about religious freedom while in Rome, and the risks of the Chinese Communist Party.

While briefing the travelling press en route to Ireland on Oct. 2, Pompeo admitted the pandemic had made diplomatic travel a “little difficult” and blamed the Chinese regime for “unleash(ing) a virus on the world.”

“You all are standing here wearing masks because they decided that they were going to let people travel out of Wuhan when they knew—and they disappeared doctors,” Pompeo said.

Beijing has confirmed its displeasure at the meetings via its Foreign Ministry spokesperson, Wang Wenbin.