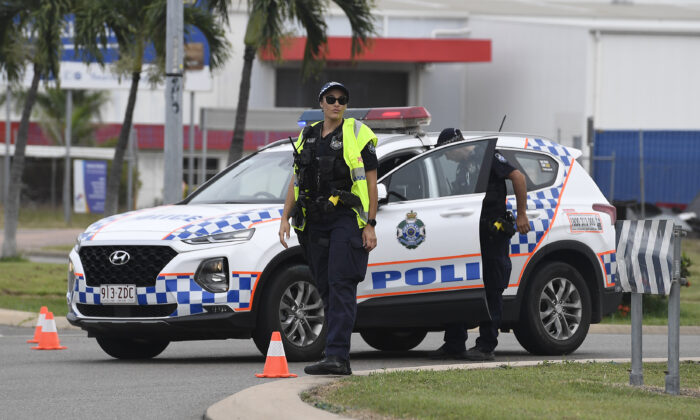 A neighbour armed with a serrated knife has slashed a police officer across the face before being shot in the inner Brisbane suburb of Kangaroo Point.

The incident unfolded as police tried to serve a warrant on a man at a unit complex in Riverview Terrace at about 11.30 a.m. on Wednesday.

As the officers spoke with the man, they were ambushed by a neighbour armed with a large serrated blade.

“They were confronted by a male from another unit that has entered in the unit and stabbed one of our officers in the chin with a 20-centimetre serrated knife,” Detective Superintendent Andrew Massingham told reporters at the scene.

The neighbour attempted to flee, only to be confronted by police and told to drop the weapon.

Police attempted to taser the neighbour before a junior female officer fired a single shot into the man’s abdomen.

“The offender immediately fell to the ground, was disarmed, and first aid was applied immediately,” Det. Supt. Massingham said.

The 38-year-old remains in critical condition at the Princess Alexandra Hospital.

The injured officer is also undergoing treatment for non-life-threatening injuries.

“He’s in his 40s, and he is deeply shocked as to what’s occurred,” Det Supt Massingham said.

“Again, today we’ve witnessed an incident involving your frontline police that is tragic and confronting.”

The 38-year-old man has a history of violence, Det. Supt. Massingham said, confirming police had previously visited the address in relation to mental health concerns.

“We were here investigating a stabbing that is alleged to have occurred in June last year where the same offender (the man who was shot) stabbed a male associate in the temple, and that matter is still currently before the courts,” he said.

The incident is under investigation.