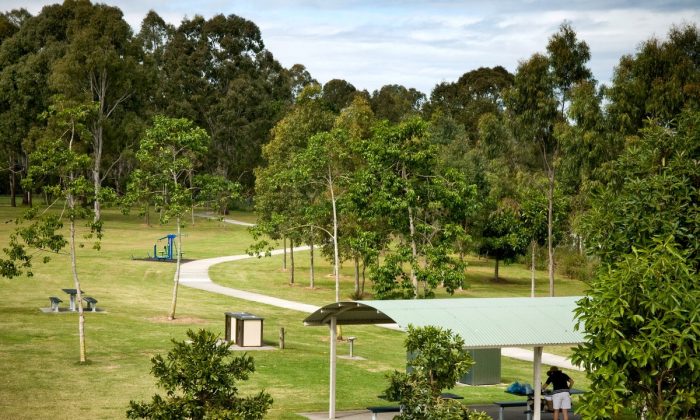 An undated photo of the Logan River Parklands. (Courtesy of the Australian Tourism Data Warehouse)
By AAP

A man who abandoned his son in a Queensland park because he was tired of looking after him and blamed the toddler for the family’s woes has been jailed.

What happened to Baden Bond after he was deserted on a park bench at dusk 50 metres from the Logan River in May 2007 is not known.

“His remaining time alive was probably full of fear and an understanding that he had been abandoned.” My heart broke listening to the sentencing for Baden Bond’s manslaughter. @ClareBarnes_10 was in court and has our story at 5pm. @10NewsFirstQLD pic.twitter.com/Q30Uu6uUbL

The two-year-old’s body has never been found but he is presumed to have drowned alone in the dark in the river south of Brisbane.

“One can only speculate as to how long he survived and what his mental state must have been,” Justice Peter Applegarth told the Brisbane Supreme Court on Mar. 7.”

“His remaining time was probably full of fear.”

Justice was a long time coming for Baden, as his father Shane Arthur Simpson lied to his family, the police, government agencies and a federal court for a decade about his whereabouts.

These included that Baden was with an aunt, his grandparents or in foster care. He was “given away” or the “government took him.”

Simpson finally admitted to leaving him at the park, and admitted to manslaughter, but has never shown remorse, Justice Applegarth said in sentencing on Thursday.

“Even someone with low intelligence and poor ability to solve problems had time to think and would have realised the danger to Baden,” he said of the “callous” abandonment.

Baden was born to Dina Colleen Bond in 2005 with methamphetamine in his system, resulting in he and his siblings being taken into care.

Baden’s parents blamed the baby for that.

Shane Arthur Simpson has been committed to stand trial for the murder of Logan toddler Baden Bond in 2007 @abcbrisbane pic.twitter.com/fwUFvleA1E

He was regularly called him “devil’s child” and “evil,” Justice Applegarth said.

“His bedroom was often locked and visiting family members were told by you and Bond not to go into the room,” he said.

“The two windows in his room were blacked out with black spray paint.”

Baden’s nappy was often left unchanged and his room smelled of urine and faeces.

Simpson said he was tired of looking after Baden and “fried” on drugs around the time he abandoned the boy without a backward glance.

He said he sat with Baden for 30 minutes at the Logan River boat ramp at Eagleby and said sorry before driving off.

“You saw no one there, it was going on dark … You say you sat on the park bench put your hand on Baden’s head and said that you were sorry,” Justice Applegarth said.

“You had planned to abandon Baden. It was not a spur of the moment decision.”

He sentenced Simpson to 12 years in prison for the serious criminal neglect.

Simpson will be eligible for parole after 80 per cent of his sentence is served but is unlikely to receive it because his son’s body has never been found.

Bond earlier pleaded guilty to two counts of being an accessory to the manslaughter for keeping up the lies about Baden.

She was sentenced to three years imprisonment but with time served will be eligible for parole immediately.